Fender is known for replacing its old, 30-year old models with something new which takes everyone by storm. Towards the end of 2016, it was obvious that Fender cared only about its new models and it had them on the horizon. A new Fender American Professional series was released with some impressive upgrades. Fender Stratocaster has always been known to be one of the best rock guitars in the world for a reason. The Stratocaster has been admired by Americans since the 1950s and it was the instrument of choice used by many veterans. Today, it has set the musical legacy for the Fender American Professional Stratocaster.

Due to the evolution of music, Fender has made quite some impressive changes and tweaks. This has enabled it to keep up with the demands of modern-day music but it still maintains its original features. The Stratocaster is part of the Fender American Professional Series which included the Stratocaster, Telecaster, Jazzmaster, Jaguar and Precision Bass. Each of them has its own features which make it a mean machine for making some good music. Without saying much, the Stratocaster will be an impressive instrument to make use of.

Who just doesn’t love the body and neck of this guitar? As stated by Fender, they are the world’s most loved electronic guitar and one looks at the Stratocaster will tell you why. The appearance is this guitar model doesn’t disappoint. 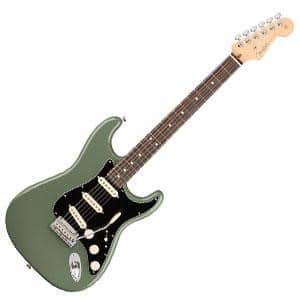 Without taking a look at any of its hardware features, the body itself is a marvel. The guitar is modeled after the old Standard series. It basically features a lot of similarities. However, the Fender American Professional Stratocaster has a new maple neck with a Deep C profile. The neck may feel heavier when close to the body and can be easily head in the hands when soloing. There, you’ll also find a rosewood fretboard with 22 narrow frets.

The most impressive thing about this neck is that it can be used for virtually any occasion. The different ways in the subtle tweaks which characterized this model. The neck balances perfectly on the hand and can easily be held. The narrow frets completely match the neck. The narrow frets are taller and smaller than normal frets. This makes it easier to control them. This can be helpful if you have to play high up on the neck where the frets are close to one another. The tall narrow frets will make it easier for you to play monster bends.

The rest of the body is quite similar to the old Stratocaster model. It has a 25.5″ solid alder body and is available in different colors namely; Antique Olive, Olympic White, Sonic Gray, and Candy Apple Red. The overall fit and finish are well-designed and give what you’ll expect from a top-quality American Fender. Overall, it’s a top-quality design.

It’s the hardware that really shows most of the change which you would love to see. There have certainly been some upgrades that have it possible to produce better sound for quality music. On the Stratocaster, you’ll find V-Mod single-coil pickups at the neck, middle and bridge. The three of them are made from different alnico and are designed to produce an improved won’t. The controls of the guitar are quite simple; you have volume control and two tone controls. At the volume, you’ll find the Treble Bleed Circuit which helps to maintain balance despite the noisy music.

On the Fender American Professional Stratocaster, you’ll find the Tremolo Bridge but a new pop-in arm which can be adjusted based on the type of player. At the other end of the guitar, you’ll find sealed chrome tuners which are impressive and easy to use. Then, you’ll also find a bone nut. The guitar also comes with a Molded Hardshell case which makes it easier to carry your favorite instrument around. The case has a durable exterior and the interior will hold the guitar securely. It was designed basically for this purpose.

There wasn’t much to improve on in the sound of the old standard Stratocaster but the American Professional Stratocaster has done pretty well. The quality of the tone matches the impressive work done on the design. The new pickups are clear but still retain the originality and impressive features of a Stratocaster. The new circuit makes it more possible to play at a high tone even with a reduced gain.

The Stratocaster features a 5-way toggle switch which can be used to choose between these pickups. There is fear from some professionals that the sound of the Strat can be quite thin. This guitar doesn’t deliver it as clean as other top guitars. Due to this, the guitar handles distortion and other effects well.

The Fender can be played for versatile use. Its sound is consistent and will give you the same result when played through an amp or through a pedal-board.

The Fender American Professional Stratocaster has surpassed a lot of expectations with this particular model. The feel of the guitar is comfortable and is easy to handle. The pickup of the guitar is known to deliver a hotter and more natural tone and the hardware helps to ensure that the sound produced is consistent and reliable. This guitar can be used by different players to suit different styles. It can also be used to suit beginners and professionals as they play to their favorite tunes. Yes, the price of the Fender American Professional Stratocaster is on the high side but its totally worth it. Would you want to try it out?