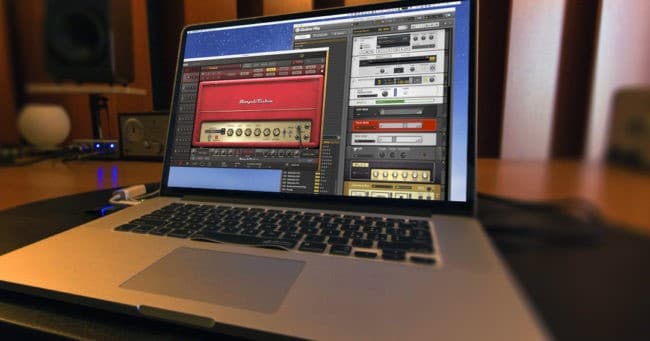 If you desire a solid amp simulator, there is a good chance that you want to know which one comes out on top in Bias FX vs. AmpliTube. While both amp simulators work well, the difference in features means the winner changes from between cases. Unable to make up your mind? In that case, this article is for you.

What is Bias FX 2 Elite?

Bias FX from Positive Grid is an all-in-one guitar powerhouse that lets you access all modern effects and amp models at your fingertips. It’s fully customizable, allowing you to play around with your bass, acoustic or electric guitar. It works as a standalone app, you can enjoy all its functionalities whether you’re using a Mac or a Windows PC.

Bias FX 2 comes in three versions and the Elite pack is the most expensive and the most comprehensive among the three. If you don’t want to overwhelm yourself with all the effects, you may get the Professional or the Standard version, starting at $99.

What is AmpliTube Max?

A complete AmpliTube collection, the AmpliTube Max has everything you need to make the most out of your guitar sounds. With over 300 pieces of gear, you don’t even know where to start. Pushing the fuss aside, AmpliTube Max makes recording easy and fun.

Like the Bias FX, AmpliTube also comes in three different versions, the entry-level AmpliTube 4, the more advanced AmpliTube 4 Deluxe and the complete pack AmpliTube Max. Since serious musicians are up for a greater challenge, your choice will only be the Deluxe and Max versions. Luckily, AmpliTube Max is currently offered around 50% off, so it’s a good choice budget-wise.

Amp sims include a lot of things, hundreds of effects, amplifier models, and so on. For beginners, maybe it’s hard to swallow and may be difficult to digest, but, just relax because everyone who’s becoming an expert with amp sims started in your current situation. Though the inclusions of each software suite are overwhelming, here is a side-by-side tabulated comparison of some of their features.

These features are just a few of the hundreds of things you’ll see from either of these amp sims. These two are available both in Windows and Mac. Bias FX needs a Core i5 for Mac (OSX 10.11 or macOS 10.12 or later) and at least Intel i5 with 4GB RAM for Windows (Windows 8 or later).

Likewise, AmpliTube works for 64-bit Mac (Mac OS X 10.7 or later) with Intel Core 2 Duo, 2GB(4GB suggested). For Windows PC (Windows® 7 or later), it needs an Intel® Core™ 2 Duo or AMD Athlon™ 64 X2, 2GB of RAM (4GB suggested). Your computer should have an ASIO compatible sound card for it to work properly.

These two are designed to revolutionize the audio recording, at the same time, create wonderful music you never thought possible before. Bias FX offers more versatility when it comes to post-production editing. AmpliTube, on the other hand, gives you access to ultra-realistic sounds and playing experience on the fly. You won’t feel like you’re only using virtual amp when using the AmpliTube Max.

Since this is just the software, there are still a lot of things to consider. Although the learning curve could be one, everyone who is new to either of the software will surely endure a steeper trajectory. But, if you are serious enough, it’s easy to ace both in a little time. You can check this high-gain shootout between a Bias FX, TH3, and AmpliTube to get the idea of how Bias FX and AmpliTube really work:

Creating music has been made simpler with amp sims. Not only that, you can add tons of effects and incorporate your unique style without the need to play all kinds of guitars and plug into different amps. With amp sims, you’ll be able to maximize your time, potential, energy, and talent. So who’s the winner of the Bias FX vs AmpliTube comparison for you?

Choosing either a Bias FX or an AmpliTube shouldn’t be based on which is cheaper or which has more effects, it should be based on your style. But if you’re on a budget, Bias FX is okay as it has all the basics plus interesting add-ons. If you want a more sophisticated software suite, get the more expensive AmpliTube Max. But, then, again, know your music and what’s your style before jumping into buying either of them.