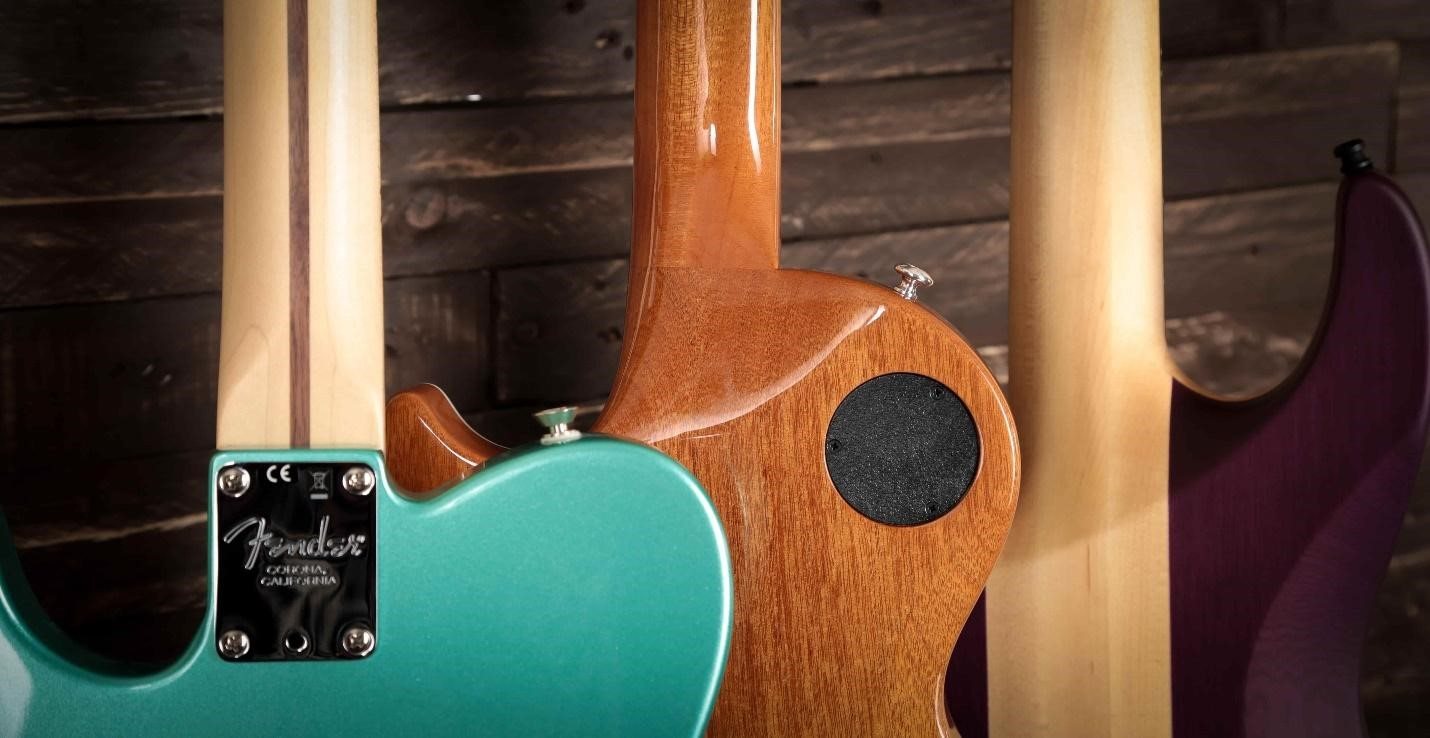 Have you ever wondered how the body of your guitar connects to the neck? Well, if you have that kind of question and confusion in your head, you‘ve come to the right place. This article will discuss the most popular neck constructions — bolt-on vs set-neck. You’ll know their differences in certain aspects as well as their advantages and disadvantages.

If you haven’t paid a closer look at the neck construction of your guitar, now is the perfect time to do it. There’s not just one, but three neck construction methods — bolt-on, set-neck, and neck-through. The first two will be the main topic of this article, but for the sake of those who don’t know, the neck-through will be quickly discussed.

The simplest and easiest way to mass-produce, this type of neck construction is more convenient in a lot of ways. Although the setup may need extra keenness, this kind of neck configuration is also very easy to maintain, repair, and replace. The bolt-on neck is commonly associated with Fender guitars since the 1940s.

It’s a two-piece neck construction in which the neck is glued to the guitar’s body. This is more expensive than bolt-on configuration, but you can achieve good sustain and warm tone. Many manufacturers other than Fender adopt this kind of construction. But, good luck with the service and repair. You might want to have a professional luthier to make even the slightest change of the neck-to-body angle.

This kind of neck construction is common to high-end guitars. The neck isn’t just attached to the body, but it’s the body. The piece of wood for the neck extends through the entire length of the guitar’s body and the sides are glued to the core. Though it’s very sturdy with only a minimal need for repair, service could be impossible. Since this configuration is hard to mass-produce, it’s the most expensive of the three.

For you to appreciate the difference between these two, it’s very important to know how to set up the neck using each method.

For the bolt-on neck, as mentioned, it’s the easiest of the three. Simply place the neck in the neck pocket and screw it. The neck should drop in or just snugly. Unless if the guitar has a color finish, the neck might be a struggle to put in place and you might need to compensate for the finish buildup.

Though it’s the easiest neck construction method, the real deal would be on drilling the bolt holes. To do this, you must locate the center of the neck pocket, probably you can check if the neck is centered in the body using a long straightedge. Place the tool along the edge of the neck towards and over the bridge. You can easily tell if the neck is not at the center using the distance between the straightedge and the E-string — and then adjust to make both sides equal.

Some guitars already have neck holes, maybe around two or three. You just need to mark the locations of these holes so you can easily drill and add the bolts. If your guitar doesn’t have neck bolt holes, you can add maybe four using a neck plate. During the drilling part, you should be able to hold both the neck and the body in place to avoid mistakes.

The set-neck construction, on the other hand, is quite straightforward with the neck and the guitar’s body, joined with either a tightly fitted mortise-and-tenon or dovetail joint. The connection is then secured with hide glue, epoxy or other strong adhesives. These are most popular in acoustic guitars and stringed instruments from Gibson, Taylor, Collings and more.

Check out this YouTube video for more insights on how the two neck construction differs. Also, you’re going to see another method of attaching the neck without any bolt or glue.

When the construction is properly executed, both bolt-on and set-neck guitars obtain a strong neck-body connection. However, the set-neck guitars might easily turn unstable though you’ll get the ease of access to the upper frets.

If you’ve played different guitars with different neck construction, you’ll observe that bolt-on guitars produce snappier and “twangy” tones. Since the bolt-on method doesn’t use glue, there is a small gap between the neck and the body, which slows the sustain compared to the set-neck design.

For the set-neck, the gap is eliminated because the connection is made using glue. Therefore, you can achieve better sustain and resonance. With this design, you can have a warmer and fuller tone.

Bolt-On vs Set-Neck: Advantages and Disadvantages

Both methods have loyalists because each guitarist has different preferences. One might like the bolt-on neck because it seems stable and easy to repair, while others like the set-neck design for its warm and full tone characteristics. So, here’s a summary of the advantages and disadvantages of both neck construction methods.

There you have it folks, the complete comparison between bolt-on vs set-neck. Though bolt-on configuration is easier, it requires perfect drilling of the holes and the perfect tightening of the bolts. For the set-in, the setup seems pretty straightforward, but it’ll take more time because the glue (or other adhesives) needs to settle and dry first.

Neither is better nor worse because their design gives them unique tonality. So, for your consideration, you should know the kind of sound and also consider the repairability of the guitar. That’s why the advantages and disadvantages are also presented for you to easily pick your best. Enjoy and good luck.