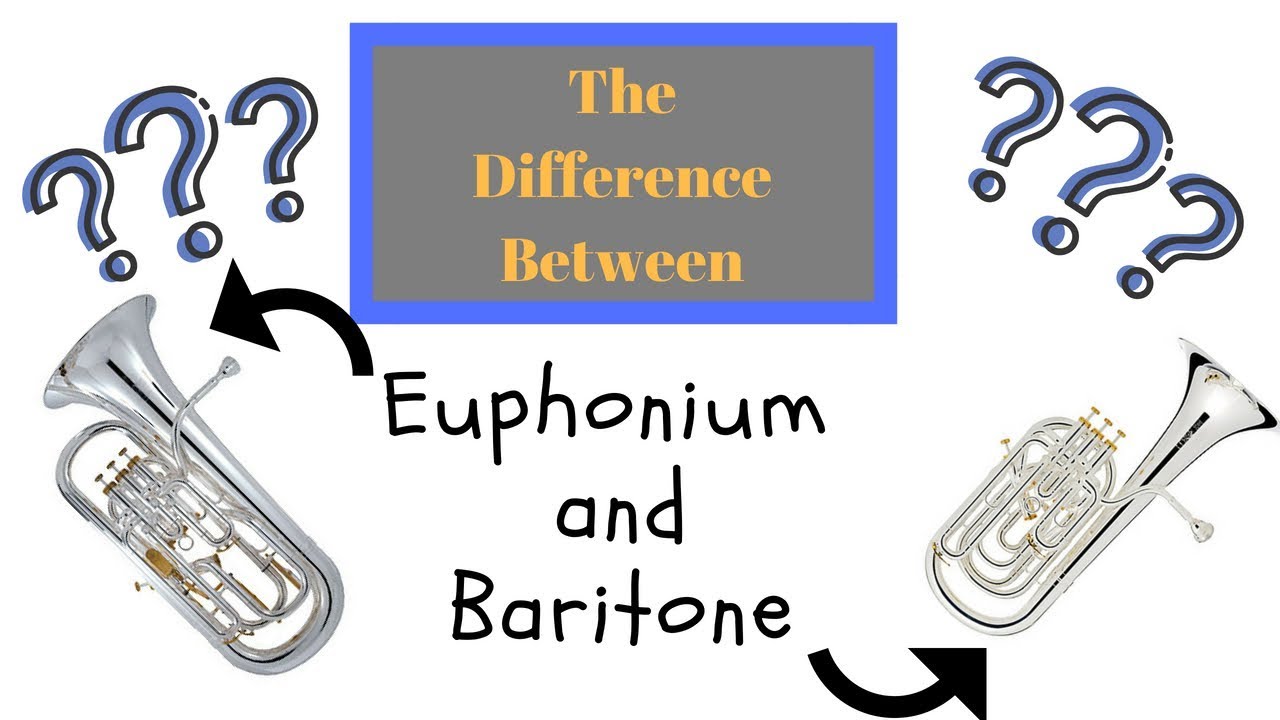 Euphonium and baritone are two different brass instruments that are almost similar in terms of sound. For an untrained ear, these two may sound the same. However, once you get to know the difference between euphonium and baritone, you’ll be able to distinguish which sound comes from what instrument.

Not all people know what euphonium really is and how it differs from the baritone. Some people believe that euphonium is just a well-played baritone. In addition, there are certain euphoniums that are referred to as “baritones” associated with a lower price tag, while “euphoniums” for more expensive models.

Likewise, others also got more confused because a baritone can be a baritone horn or a baritone voice. At least, one thing is clear to you right now, this article will differentiate the brass wind instruments, euphonium and baritone sax.

A medium-sized brass instrument that belongs to the tuba family. It has a larger conical bore and a larger bell. It’s basically a conical-bore instrument that refers to the constantly expanding tubing from the mouthpiece to the bell. 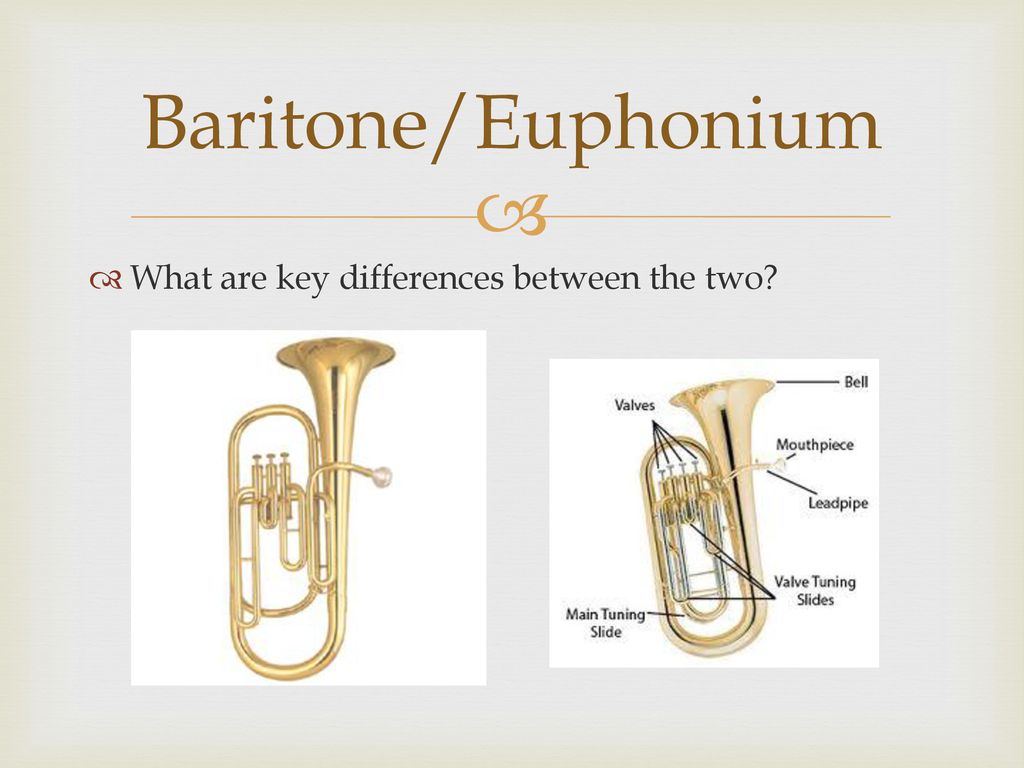 Euphonium comes from the Greek word that means “well-sounding” or “sweet-voiced.” You can see this instrument in any ensemble – one of the instruments that provide harmony.

What is a Baritone?

At least, you know about baritone, right? Baritone horn, simply referred to as baritone, is a low-pitched brass instrument with a narrower bore and smaller bell. It belongs to the saxhorn family with a deep cup-shaped mouthpiece. It’s characterized by cylindrical tubing, meaning, it has an almost consistent bore size from the mouthpiece to the bell. A baritone is a very important instrument in the British brass band. 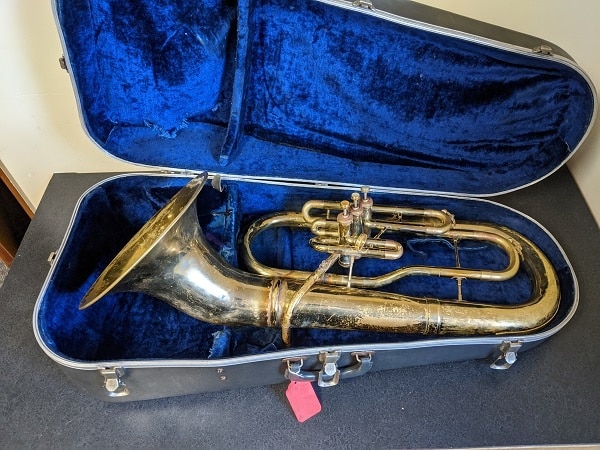 Although it’s out of topic, perhaps you’re curious about baritone voice. This is a male singing voice that falls in the range between bass and tenor voice types – lower than a tenor, but higher than bass. Among the famous baritone singers are Elvis Presley, Frank Sinatra, and Bing Crosby, among others.

With the information provided above, you can now distinguish euphonium and baritone to some degree. Yet, if you need to decide which to choose between the two, you need to learn more about them, especially in terms of setup, sound, use, and, of course, price considerations.

Though there’s a difference in terms of the tubing configuration of these two, there’s one more obvious difference – the number of valves. In general, the baritone has only three valves, while euphonium has three or four valves. The fourth valve of the euphonium helps you achieve better intonation. Just like the baritone, the three valves in the euphonium are the top action played by the right hand. The fourth is mid-way down to be played by the left index finger.

As mentioned in the introduction, it’s really hard to distinguish the sound of these two instruments if you aren’t familiar with them. But, in general, the difference in their tubing configuration gives them the kind of sound unique to the instrument.

The conical tubing of the euphonium gives it a darker, richer, and more powerful tone. On the other hand, the cylindrical tubing of the baritone allows the instrument to produce a brighter and lighter tone. Two brass instruments of similar looks, but have completely opposite sound characteristics.

This YouTube video will explain the sound difference further.

Generally, baritone is great for cutting and “solos,” while euphonium is a traditional concert instrument. Lastly, both instruments are used in military bands, too. 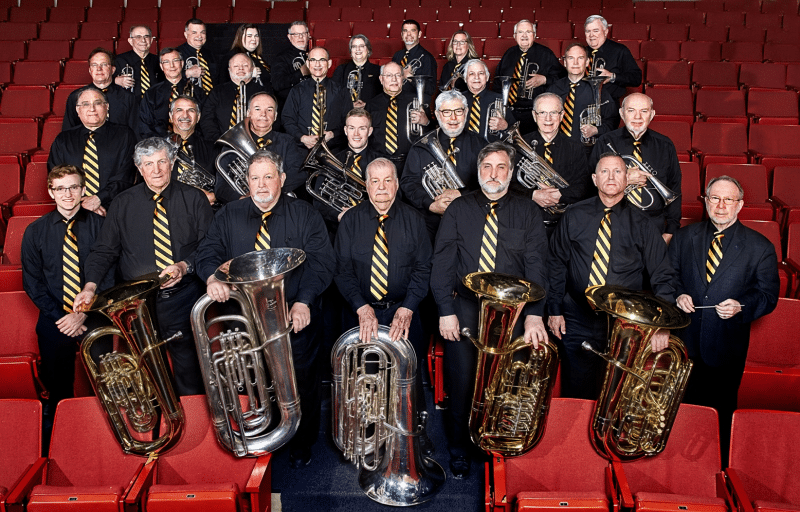 Among the most popular euphonium players are Bert Sullivan, Alex Mortimer, and Phineas Bower. For the baritone horn, this is well-played by Charlie Parker, Bob Gordon, and Gerry Mulligan, among others.

Traditionally, there wasn’t much difference in the price between these two instruments. However, recently, the cheaper, more like ‘student’ instrument is referred to as baritone, while the premium ones are the euphoniums. Though the price is also a consideration, don’t be fooled that pricier is better. It should boil down to your preferences.

Which is Best for Beginners?

Baritone is the best choice for beginners. It’s lighter and smaller compared to euphonium. But, if you need more challenge, especially when you’re eyeing to be in an orchestra, begin by playing the euphonium.

Is Euphonium Difficult to Play?

It’s a bit more challenging to play euphonium than the baritone. The reason behind this is the conical tubing. Since the tubing slightly becomes bigger towards the bell, you must have a bigger lung capacity to produce consistent sound out of the instrument. Additionally, euphonium might also be bulkier to carry because it’s wider. However, once you know how to play one, you can easily play the other.

It’s decision time, which is better? Only the player can really answer this question.

For beginners on budget and not sure what to buy between the two, start with a baritone – it’s generally cheaper and easier to play with. However, if you want a bit of a challenge and are willing to spend more on a more expensive brass instrument, surely the euphonium is a great choice. 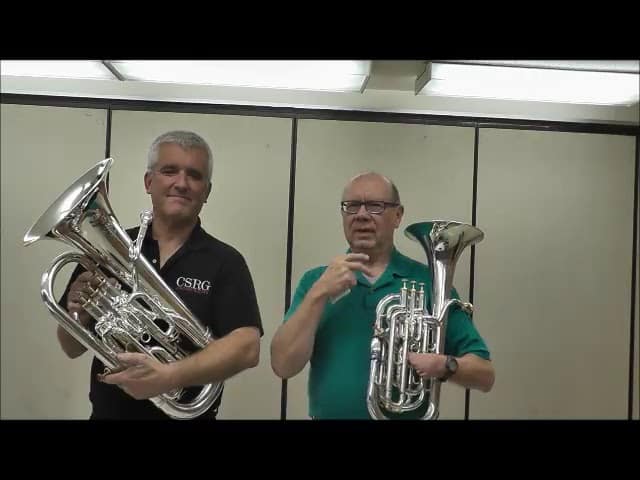 The biggest consideration isn’t about the price tag, but on what kind of sound you want to produce. If you want a fuller and richer sound, go for a euphonium. Yet, if you want brighter and livelier sound, the baritone is the perfect instrument.

Lastly, you must consider your comfort while you play. Euphonium is slightly bigger and bulkier, so it means heavier compared to the baritone. Choose the one you can play with ease, so you can express yourself through these instruments. Remember, whether you start with euphonium or baritone, you can easily play and master both. For now, choose the one that can serve you well.