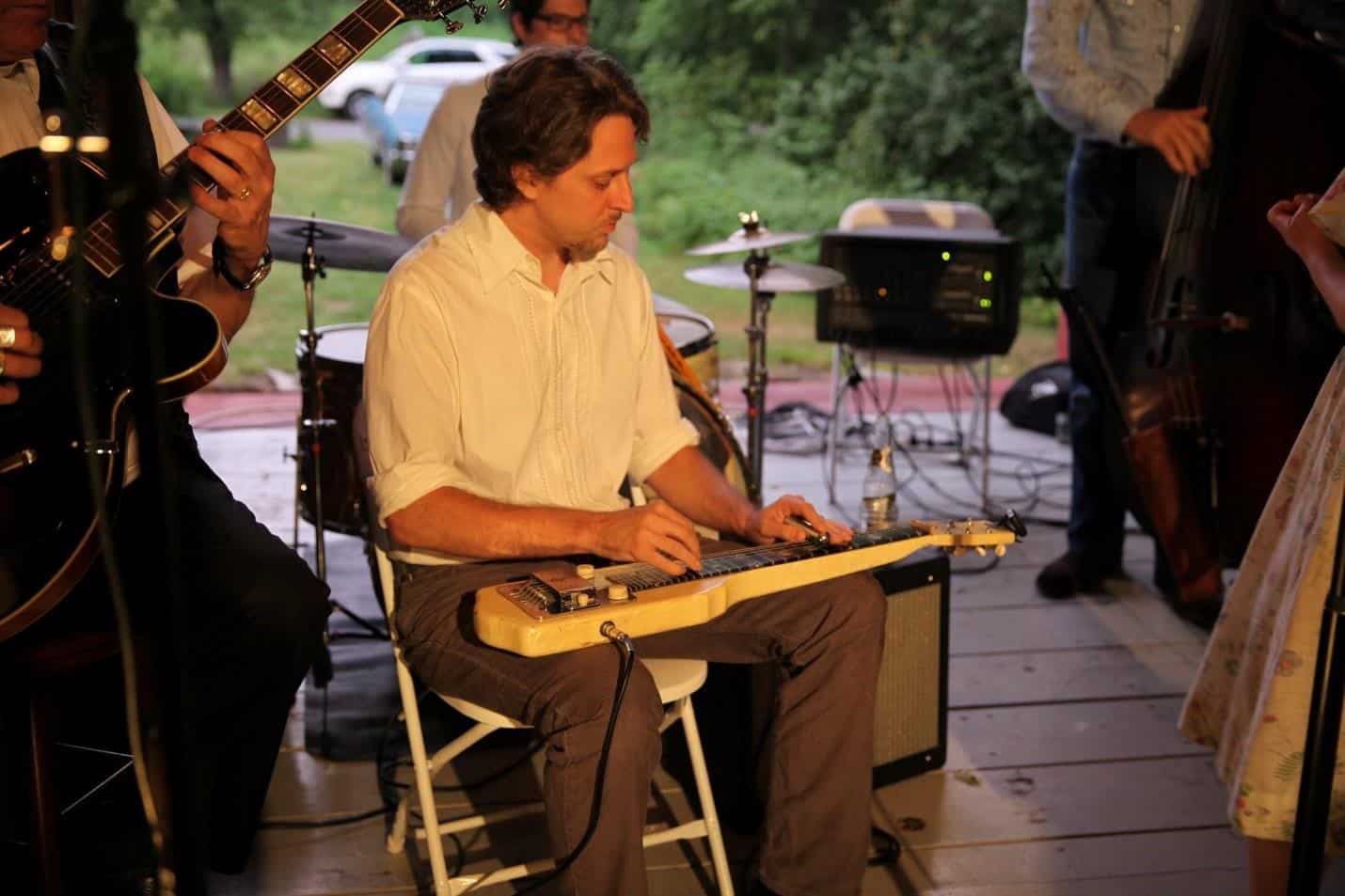 If you see in stage performances and live concerts, most guitars, whether acoustic or electric are played vertically. One hand frets the chords using the fingers, while the other hand can strum or pluck the strings to produce sounds.

Yet, you can also see a few performing live with the guitar on the lap and positioned horizontally. If you’re wondering what these instruments are, then, you’ve come to the right place. When it comes to the guitar played horizontally, it’ll always be a dobro vs steel guitar debate. Don’t confuse steel guitar from steel-string guitar as they are completely different things.

In this article, you’ll be able to know important details about Dobro and steel guitar, including how they are played and how they sound. Just a teaser, dobro is popular for bluegrass, while the steel guitar has a great tone to add for rock music. Sounds interesting? Let’s go.

Well, it’s an acoustic guitar in terms of design, but not on the way it produces sound. It doesn’t have the traditional round acoustic soundhole, instead, a perforated plate cover is on its place.

Dobro is a portmanteau of the words “Dopyera” and “brothers.” In 1928, John Dopyera invented the first resonator guitar for the National String Instrument Corporation. However, Dopyera left the company and start a new company with his brothers in 1929. The original design of the Dobro was already patented by his previous company, hence, he re-invented it to what it is today.

If you’re not familiar with Dobro, it looks like a piece of art and its design is great to be on display. However, each part has a specific purpose of why they are designed as such.

Again, instead of the traditional round hole, it has a large, round, perforated plate cover on it. Usually, you can see two small round holes or f-holes on each side of the fingerboard. The bridge is located at the center of the plate cover.

There are two types of Dobro guitars, Square Neck and Round Neck. The former is played in when laying on your lap, while the latter can either be played lap-style or conventional manner. No matter what type of Dobro guitar, it should have an inverted cone design, center-set bridge, 8-legged spider system, and round, perforated metal plate cover to be called a Dobro.

What is Steel Guitar?

It’s a type of guitar developed by Joseph Kekuku in Hawaii during the late 19th and 20th centuries. Hence, it’s also referred to as the Hawaiian guitar. Steel guitars are popularly played horizontally using a steel bar (glass or any type of material) to change the pitching note with one hand, while the other hand plucked the strings.

There are two popular types of steel guitar — lap steel guitar and the pedal string guitar. Lap steel guitars are played horizontally on the player’s lap or otherwise supported. The strings are raised on the nut and the bridge by around half an inch, so the string height is higher. Hence, the metal frets are replaced by markers.

Pedal steel guitars, on the other hand, are like a harp with extra necks, each in a different setting. It doesn’t have the typical six or 12 strings of the guitar. Each neck has around 8 to 14 strings, with up to 10 pedals (excluding volume pedal) and a maximum of eight knee-levers to change the tuning. Though it makes the pedal steel string versatile, it’s playability is a bit complex.

Both guitars are usually played in a lap-style fashion with the use of a slide or a steel bar. The guitar is played horizontally with the treble strings at the outermost and the bass strings are oriented towards the players. The neck and headstock are to your left, while the bottom of the guitar is to your right.

Instead of the metal frets, Dobro and steel guitars have painted frets because the string action is too high. You might think it’s easier to play because it’s lying on your lap, the opposite is true. Aside from the high action, there are other things you need to know — palm damping, slanting the bar, thumb dumping, and so on.

However, as time goes by and as these instruments evolve, since Dobro is more towards producing bluegrass music, it usually involves fast picking. There’s just one thing to distinguish between these two — not all guitars are Dobro guitars until it has the characteristics mentioned above. Check out this YouTube video to learn more:

As mentioned, the string action is quite high. Although you use a steel bar or slide, still, it’s quite challenging to perfect all playing techniques of both guitars without going through a steep learning curve.

These two guitars largely differ in the sound they produce. Of course, Dobro is best for rock music and bluegrass, blues, and folk with its banjo-like sound. While steel guitar is suitable for country, swing, Hawaiian music, reggae, soul, rock and more.

Steel guitars are plugged in electric sound with more sustain. Since it’s plugged, you can easily adjust the volume through a dial. You can get a louder output with clarity and projection. With this versatility, it can easily cut through the mix or when playing with a band.

For the Dobro, the sound production is not as straightforward as with the steel guitar. String vibrations are transmitted to the bridge and resonate through the perforations of the plate cover and to the sound holes through the eight-legged spider system. The sound will then reverberate through the inverted cone to get that bright and metallic sound.

There you have it, the difference and similarities of dobro and steel guitars. There’s no right and wrong choice if you’ll pick one over the other. Just ensure you’re up to the challenge. It’s not your typical guitar and you might start real slow on either of them.