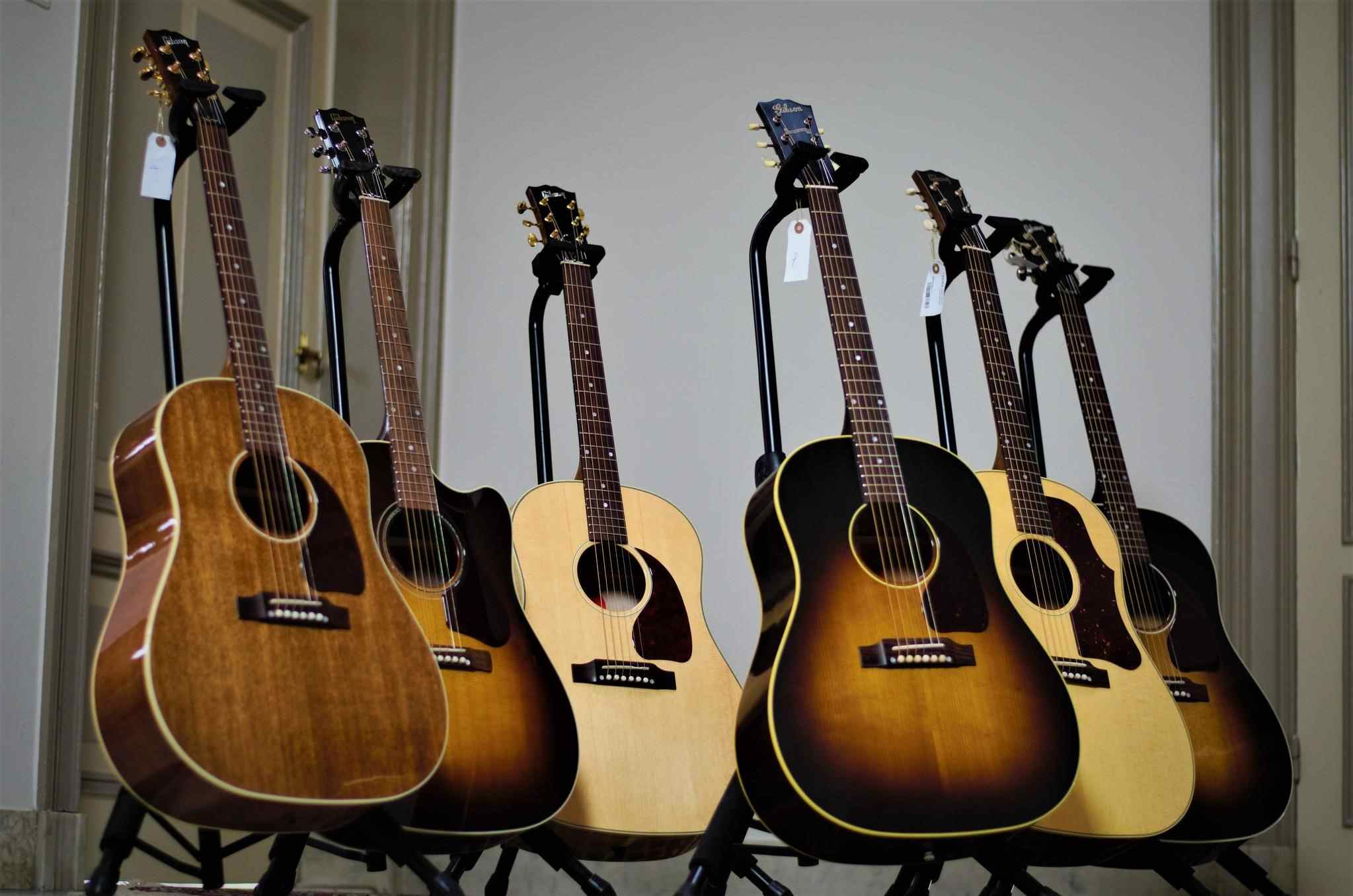 A single guitar is made of different types of woods. Unless it’s a solid-body guitar, you have different wood for the top, the back and sides, the neck and the fretboard. This article will particularly discuss the fretboard, specifically on the ebony vs rosewood fretboard juxtaposition.

Why is there a need to think about the fretboard material? If you’ll take a deep dive into guitar manufacturing, the wood materials are not just picked randomly. They are picked for some reasons, and they contribute to the overall beauty of the guitar’s sound output, that includes the fretboard material

Wood materials used to make guitars are often called “tonewoods.” And, if you’ll search on the internet, there are a lot of tonewoods used to make a guitar, but only three for the fretboard — maple, ebony, and rosewood. Still, among the three, many argue with ebony vs rosewood fretboard for most guitars because the maple fretboard is reserved for Teles and Strats.

What is Ebony Fretboard?

Such a perfect tonewood for a fretboard, the ebony comes in deep black color. It has been used for centuries to make classical instruments like the violins and cellos. Traditionally, there are two types of ebony, Macassar and Gaboon or African ebony.

The former comes from Southeast Asia and is included in the Red List of vulnerable species. Likewise, Gaboon is also endangered due to its fast population reduction over the years. With this, guitars with ebony fretboard are not very common and are typically more expensive.

What is Rosewood Fretboard?

Rosewood isn’t only used as fretboard material, but also as back and sides for other stringed-instruments like violins and mandolins. It can easily be distinguished because of its dark reddish-brown color. But, it comes in different species, so you’ll get a rosewood from very dark, almost black to espresso brown.

Among the most common rosewood varieties are Indian, Honduran and Brazilian. Honduran is usually lighter in color, but it’s becoming more endangered like the Brazilian. So, the most common and less expensive rosewood is the Indian rosewood. You can find rosewood fretboards on Gibson guitars, PRS and Ibanez.

Ebony vs Rosewood Fretboard: The Looks

Although both ebony and rosewood is darker, you can easily distinguish them, when two guitars are placed side-by-side. Ebony tends to be a bit darker, almost black compared to rosewood. And, the latter shows dark red tints.

Sometimes, Honduran rosewood is stained (darker) to make it look like the more restricted Brazilian rosewood. Ebony, on the other hand, doesn’t need any stain or finish because of its tight grains in the wood. So, if you’re faced with a dilemma where the rosewood is stained to look like ebony, just look closer. The grain is much larger on rosewood than on ebony.

Ebony vs Rosewood Fretboard: The Playability

In terms of grain characteristics, ebony is more open-grained than rosewood. However, both of them allow flawless string bending compared to maple. For both fretboard tonewood, the strings will have more “bite,” so players will have more control when bending strings.

If you’ll look at the bigger picture, ebony seems to be the middle ground between maple and rosewood fretboard. Rosewood doesn’t require any finish because of its oily nature and natural slick feel. Ebony also accommodates fast action with a sleek feel. Both rosewood and ebony are naturally oily, so you won’t have any “sticky” feel. However, this will also be reconsidered as the natural oil content may tend to have any potential reaction.

Blues musicians like Stevie Ray Vaughan and even the guitar legend Eddie Van Halen, prefer to play guitars with rosewood fretboards. Peter Frampton and Ace Frehley were among the few artists who play ebony fretboards on a Les Paul guitar. More tips are given to you through this YouTube video:

You may think that the fretboard only affects the feel and playability of the guitar. But, somehow, it’s unfair to the fretboard tonewood. A good tone of a guitar is derived from the combination of different tonewoods, which includes the fretboard material.

Some guitarists claimed that they can distinguish the fretboard material of the guitar mainly from the sound it produced. How is that so?

Since rosewood is a bit porous compared to ebony, it can offer warm, rich and softer sound. It has a nice balance which is good for bright-sounding guitars. New strings won’t sound harsh on a rosewood fretboard compared to ebony.

The ebony fretboard, on the other hand, tends to be brighter, crispier and dry sounding. Guitars with ebony fretboard tend to have a razor-sharp top end and well-defined low-end. Its tonal quality is like the maple, but it’s more durable than the maple.

Both ebony and rosewood seems to be straightforward to clean. With a clean, lint-free cloth, you can wipe the fretboard every after playing and you may apply acid-free oil once every few months.

It’s also advisable to put appropriate fretboard conditioners to the ebony fretboard sometimes. Ebony is more sensitive to humidity changes, so you might encounter cracks when the material is shrinking or expanding. “Lemon oil,” for example, will help keep your fretboard in good condition.

Fretboards maybe one of the least considered part of the guitar, yet it plays a great role and contributes to the overall tonal quality of your guitar. With the ebony vs rosewood fretboard consideration, it boils down to the preference of the player in terms of playability and sound.

Both have natural oil content and are good to the hand. Although rosewood doesn’t need any finish because of its natural slick feel, ebony has a good grip, too. But, if you want a warmer and richer sound, you’ll only get it from rosewood fretboard. Likewise, choose an ebony fretboard if you want a brighter tone with good bass response.