If you’re really familiar with guitars, then you must have come across the Epiphone Les Paul Standard guitar. It’s a quite popular guitar and it has a rich history. It has gone through different phases of innovation and the evolution of electric guitars. This guitar was made by a collaboration between Les Paul and Gibson. At the end of the day, we were provided with an impressive guitar.

After some time, Les Paul became owned by Epiphone. Using the resources at its disposal, it added more functionality to its new guitar. Also, more models have been consistently produced. These new models may be cheaper than the original models but don’t mistake that for a drop in quality. Epiphone is a renowned manufacturer in the industry and you can expect some of its quality to show. They’ve built these new models to be a complete match for the original models. It was simply built as a cheap alternative to the original Gibson Les Paul.

Epiphone guitars have been produced to suit the highest industry standards. Also, Les Paul’s name is also a mark of trust which tells guitarists that they can play the guitar to suit all styles. If you’re still unconvinced about the quality of this awesome guitar, take a look at this Epiphone Les Paul Standard review. You’ll find some quite interesting information.

There are two legendary guitar shapes out there and Les Paul is one of them. This guitar maintains a similar build and physical appearance to the original model. All of the main features of the Gibson model are still present in this new one. The body of the guitar is made from mahogany with a treated maple top.

There’s nothing really extras about the appearance of the Epiphone Les Paul but the class is obvious. It is appealing to the eye and widely accepted. The neck is made into a standard maple design. The neck of the guitar is stable and it makes playing pretty easy. It also has a rosewood fretboard and similar abalone inlays to the Gibson Les Paul. Basically, once you start playing it you see how comfortable it is to hold and handle. Its shape is just right and it can be held even when playing fast tempo.

A distinguishing feature of all Gibson Les Paul guitars is their alnico humbuckers. That was the major difference between them and Fender back then. The Epiphone Les Paul guitar also has a similar set of alnico pups. They can be controlled with this easy and used to determine the tone.

There’s still more to find. You’ll find two tones and a two-volume selector switch. There’s also a pickup selector switch that offers you more. All of the controls feel well-built and the knobs turn accurately. They’re easy to control and you can easily control the volume in virtually any type of scenario.

If you’re familiar with the hardware on Gibson guitars, these will not come as a surprise to you. You’re probably already used to seeing the hardware already.

There’s a Tune-o-Matic bridge on which sits six adjustable saddles at one end. You’ll also find a set of die-cast tuners that keep in place and make tuning pretty simple. All of the hardware which you will find are equally as good as what you’ll find on the original Les Paul. However, you can expect a less than average performance from this guitar. The bridge is solid and keeps the tuning and intonation steady. The tuners may seem quite standard to you but they do their job pretty well.

What made the Epiphone Les Paul Standard so popular? It was its sound. So, there’s no debate about how much you stand to benefit when playing this instrument. It’s not on the same level as the Gibson Les Paul but it’s still something impressive. This guitar really dominates others in its category with its sound. It does well with the vintage tone and has a lot is pleasing to the ear. It can handle overdrive and distortion quite easily. Epiphone simply put a lot of work into this guitar and it’s obvious in the sound quality. That’s definitely a lot of value for money. 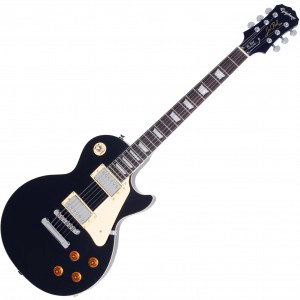 Why is the sound of the Epiphone Les Paul Standard that impressive?

Well, pretty much everything about the Les Paul Standard supports good music. The body design makes it easy to play for all playing styles and even on a fast tempo. However, this guitar still has one secret weapon; the pickups.

These pickups are quite impressive and they produce a warm and clean sound. Both pickups give you the sound of a classic humbucker but at a higher output level. They also offer more mid-range and high-range capability than modern humbuckers. It allows you to be able to easily control the sound produced. They are specially made for rocking and offer you everything that you want.

Going to the Epiphone Les Paul could be a very good choice for you. If you have enough money, it can be a great way for you to start your guitar training. It is a balanced instrument and offers everything you could ever ask for. It is known to perform effectively.

A lot of times, people end up comparing the Epiphone Les Paul to the Gibson model. The value which it offers is quite impressive. The Gibson is quite an expensive guitar but it is quite expensive. However, the Les Paul Standard is a cheaper alternative that offers equally good music. Get it and enjoy the quality it offers.