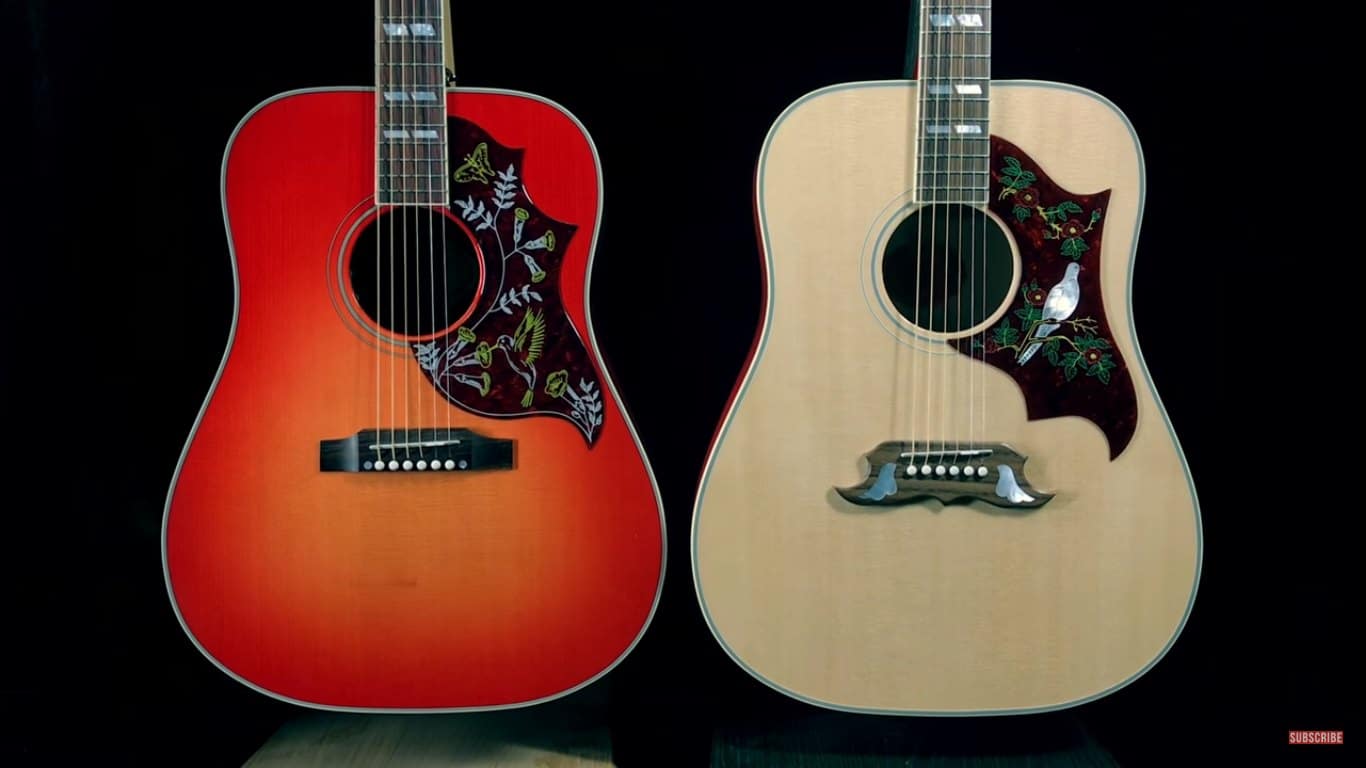 Doves and hummingbirds are not just interesting small bird species, they are Gibson’s high-end acoustic guitars to compete with Martin’s dreadnoughts. Hummingbird was released first, then Dove was introduced two years later. Are they the same or different? This article will bring to light the Gibson Dove vs Hummingbird comparison and know which of the two is better.

Founded in 1902, Gibson is established several decades after Martin’s footing in the guitar industry. However, it continues to offer something new and unique to the table.

In 1960, Gibson introduced the Hummingbird, which is a square-shoulder guitar, similar to Martin’s dreadnought. It’s the second most expensive acoustic guitar from the company next to the popular J-2000. Yet, in 1962, two years after the release of the Hummingbird, Gibson launched the blend of the Hummingbird and the J-2000 called the Gibson Dove.

These two are both square-shoulder dreadnoughts with L.R. Baggs pickup system, you’ll always ready for the stage. Yet, they differ in the materials used, pickguard, and a few other details. Learn more about these two Gibson guitars from the in-depth comparison below.

To better compare these guitars, it’s very important to start with the specifications. Although they have similar design and electronics, they’re different in a few more things, which you can easily spot using the table below.

They differ in the materials used, particularly in the back and sides and the neck. And, they differ in the scale length, which is a great consideration for some. Read on for a much deeper comparison of the two.

These two guitars seem great and their body shape looks very stable. From the specifications comparison above, you know that they share a lot of features. Also, they both have double parallelogram pearl fret inlays, a crown peghead inlay headstock and a hand-painted tortoiseshell pickguard.

However, the details on the pickguard distinguish the two significantly. The Dove has a mother-of-pearl dove inlay, while the Hummingbird, has an engraved hummingbird-butterfly trumpet-flower pickguard.

You can also distinguish them through their bridge design. The Gibson Dove has pearl inlay doves on each side of the bridge, while the Hummingbird features just a standard bridge.

If you want to get full details about the difference between the two in terms of design, this YouTube video will surely be of help to you:

For beginners, the big parallelogram fretboard inlays will help you to remember which fret you’re going to make the notes. The stock tuners are great to keep the instrument in tune. The neck of Gibson guitars is outstanding, which you can also feel it in both guitars.

Gibson Hummingbird is great for strumming or fingerpicking. The Dove, on the other hand, is a versatile guitar that accommodates different playing styles.

Sometimes, the ultimate barometer people use to pick the best guitar for them is the tonal quality of the instrument. Though these two square-shoulder dreadnoughts are amazing, a guitarist might choose one over the other.

Firstly, as mentioned earlier, Dove has a longer scale length compared to the Hummingbird. While this has a bearing in terms of playability, the sound quality can be affected, too. This is the primary reason why you’ll get a much louder sound on Dove than on the Hummingbird.

Secondly, the materials used. For the Hummingbird, the Spruce top offers powerful projection, while the Mahogany back and sides give the warmer and rounder tonality. For Dove, on the other hand, the Sitka Spruce top and flame maple back and sides combination offers unequaled clarity on high-end registries. The square-shoulder design adds tonal versatility for both.

Lastly, they both utilize LR Baggs Active pickup, which them stage- and studio-ready.

Gibson Hummingbird was the second most expensive acoustic guitar until the Gibson Dove arrived. So, this means, Dove is more expensive between these two. Since these are high-end guitars, expect that they’ll cost a few grand. Although there are modern models of these guitars, still, their prices won’t go below $1000.

Thus, if you want to own either of them, you need to save up. These guitars are worth all the money you’ll spend on them. Now, if you’re up to buying either a Dove or a Hummingbird, don’t hesitate to spend your hard-earned money because they both are worth it.

Both guitars have evolved through the years, but the fact that they’re among the high-end Gibson acoustic guitars assure you of quality guitars. Gibson Dove vs Hummingbird argument will continue to haunt the next generation. Why? Because each player and each guitarist have unique musical preferences.

However, there’s only one way to completely get rid of this confusion and that is to know right away what kind of music you want to produce. If you want an even tone with clarity, get a Hummingbird. Likewise, if you want a more defined treble end, warm, soft and perfect for backing vocals, have the Dove.