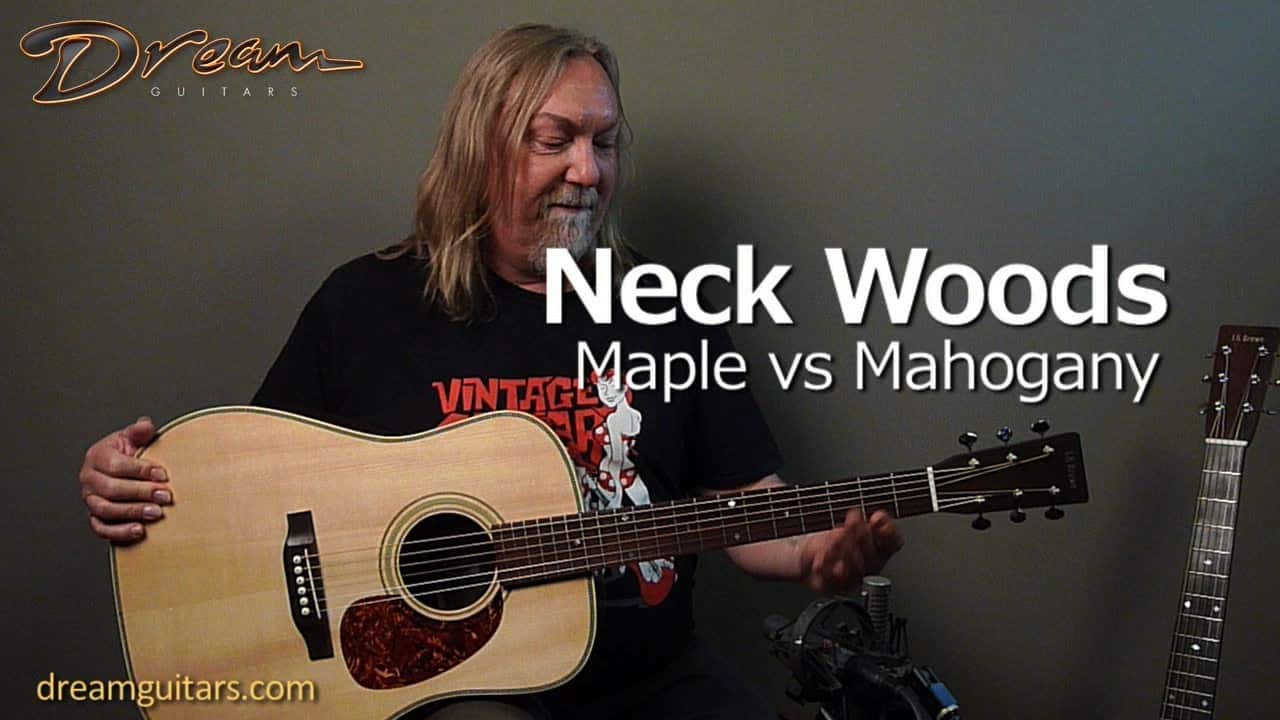 There are different tonewoods used in your guitar. The material used in the guitar top might not be the same for the neck, the back and sides, and the fretboard. Some common tonewoods are maple, spruce, mahogany, rosewood, etc. In the guitar neck, it’s usually a comparison of maple vs mahogany neck.

This article is particularly applicable in electric guitars because, in acoustic guitars, it’s mahogany that’s widely used. Just a quick note, this article will not tackle whether they have tonal differences. Rather, it’s more focused on deepening our understanding of these common electric guitar neck materials and what to choose.

Maple is a very hard material with good tonal qualities and excellent sustain. It’s a great neck material primarily because of its strength. Maple has a hardness rating of around 1000 to around 1500; the strength depends on whether it’s hard or soft maple. (In woodworking, material strength is measured in terms of its resistance to dents and natural wear and tear. It’s called the Janka hardness test.) Check Menga.net to learn more. 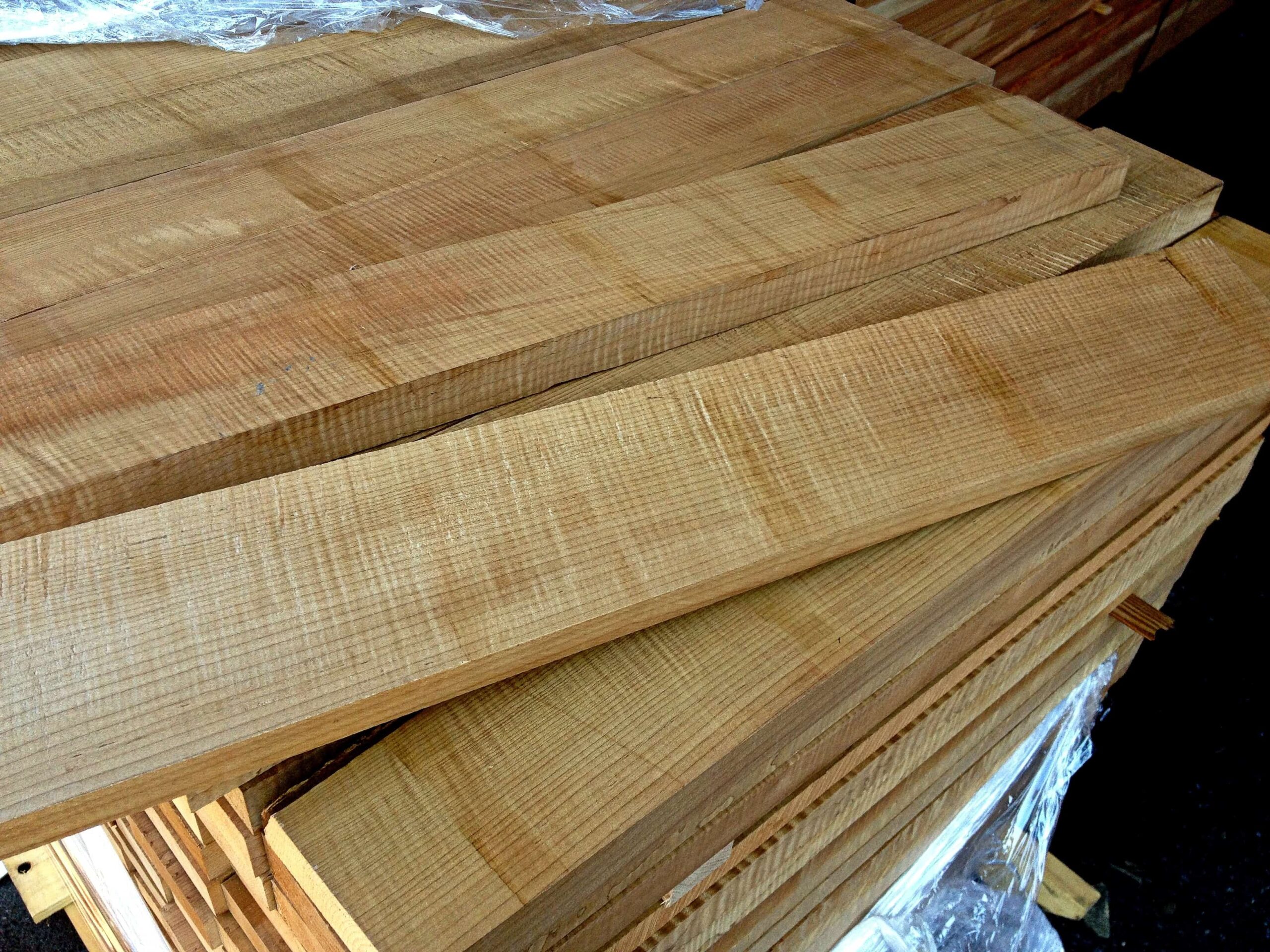 The hard North American maple has a hardness of 1450, ivory maple can reach up to 1500, while the soft maple can have a hardness rating of 1000.

Since Maple is a hard wood, you can expect that it offers great stability and sustain. It’s a very common electric guitar neck wood, particularly known as the Fender neck wood. It’s dense and strong – not much affected by environmental changes. Since it’s more stable, it requires less frequency to truss rod adjustments, hence, the guitar will stay in tune for quite a while.

Many acoustic and bass guitars are made of mahogany body. In general, there are around 49 types of Mahogany, but some of them have been extinct due to their popularity in the furniture industry and musical instruments. Mahogany is characterized by a warm tone with elaborate bottom end. It’s the material used in popular Les Paul guitars, with maple on top to achieve the overall balance of the guitar. 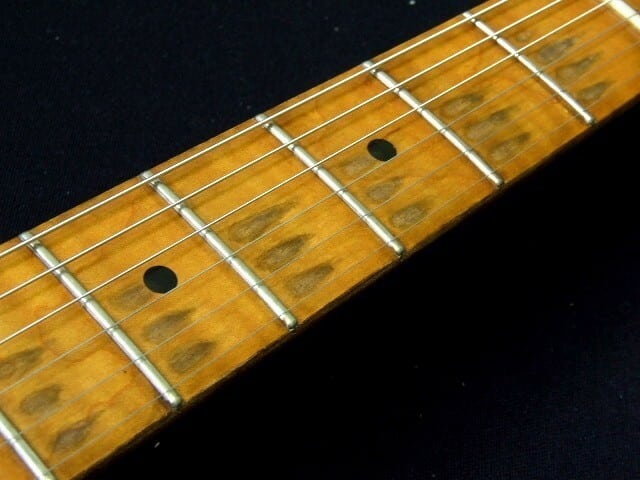 In terms of the Janka rating, Mahogany has a hardness between 800 and 900. The Honduran Mahogany has 800, while the Khaya variety of the African mahogany has 845.

Mahogany is also a stable material with even density – it’s less prone to warping. Subsequently, it has open pores and is not as hard as maple, so it’s a little more responsive. It also absorbs some string vibrations more than maple, so you can get slightly compressed highs. With open grains, Mahogany needs to be finished to fill the open pores.

Maple vs Mahogany Neck: A Story about Fender vs Gibson

As you might have observed, maple is associated with Fender, while mahogany is for Gibson. That’s right. They have been in competition for years and decades, comparing a Fender with a maple neck and a Gibson with a mahogany neck.

Fender, particularly the famous Telecasters, came with maple necks. Since then, until now, they have been using maple. However, they just changed a bit. 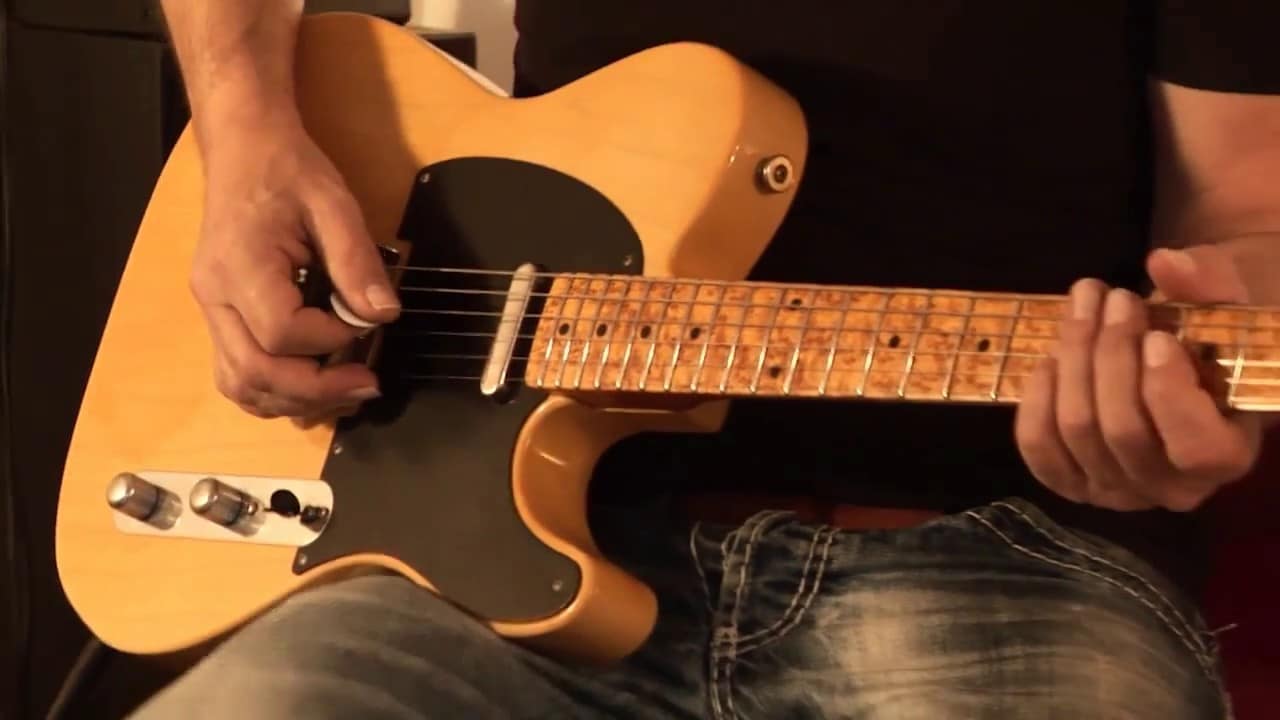 Years and years ago, Fender used to make their electric guitars with quartersawn maple, but now, they have used flatsawn maple. It’s not really a different kind of maple, but rather, the kind of processing/cutting of the lumber. Quartersawn boards are more expensive to source out, hence, they changed to flatsawn.

You can easily distinguish if it’s a quartersawn neck because of the straight grain lines on the back of the neck (from the heel to the headstock). Although Fender still offers guitars with quartersawn necks, they are on their premium guitars – which are quite expensive.

Les Paul and some of Gibson’s premium lines of guitars used to have Honduran mahogany necks. Unfortunately, as mentioned earlier, some mahogany variants have long been extinct. Hence, they replaced it with African Mahogany. The African mahogany is the closest it can get to the Honduran mahogany. 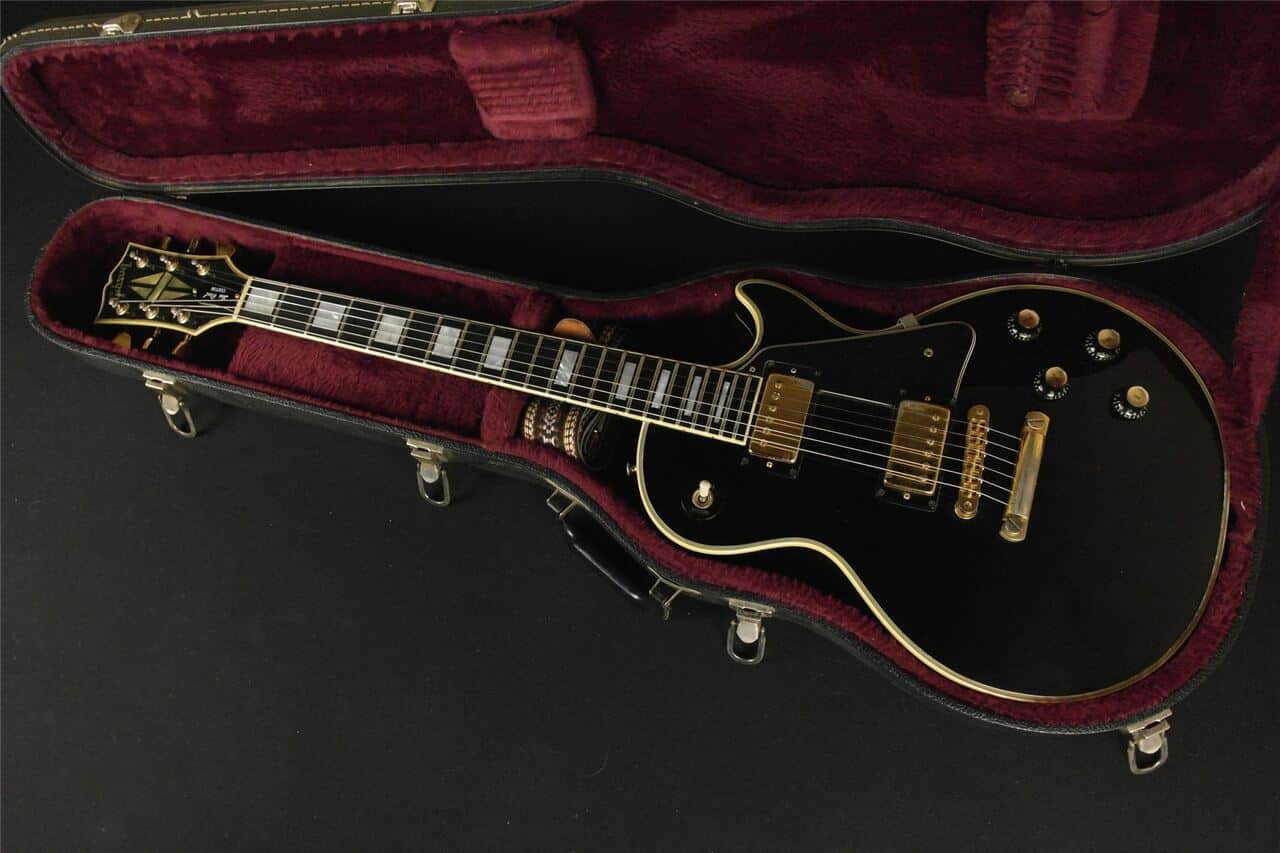 Both Gibson and Fender have changed something from their finest guitars years ago. Gibson opts to get the closest alternative for the original Honduran mahogany neck, while Fender chooses the cheapest source for the maple neck. Therefore, these great guitar makers don’t build instruments like they used to. Consequently, they can’t totally recreate the tonal quality of their iconic guitars.

So, Which is Better?

Mahogany neck guitars will probably have more “off days” – one day it plays well, the next day it’ll not, and you have to tune it again. This means it can be easily affected because of changes in humidity and temperature.

Maple is better in this sense because it won’t “flex out” that much with humidity and temperature changes. It will still flex; it still needs proper care.

If you are curious if they have a difference in terms of sound, check out this YouTube video. 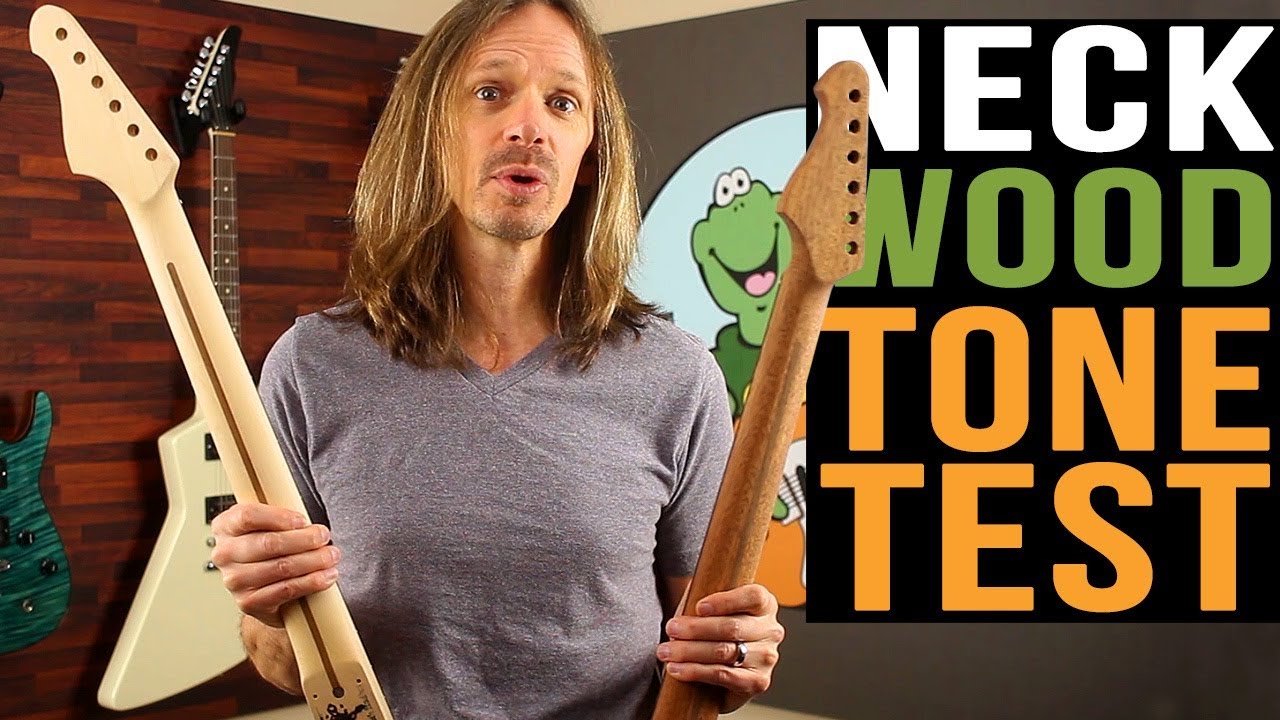 Though it’s not very crucial to choose the kind of neck you have in your electric guitar, it’s a plus point to know. Many have been comparing and discussing maple vs mahogany neck, perhaps, way back when the Fender vs Gibson argument sparked. A debate about which is the ultimate best guitar neck is rooted years and decades ago started with the comparison between Telecasters and Les Pauls. 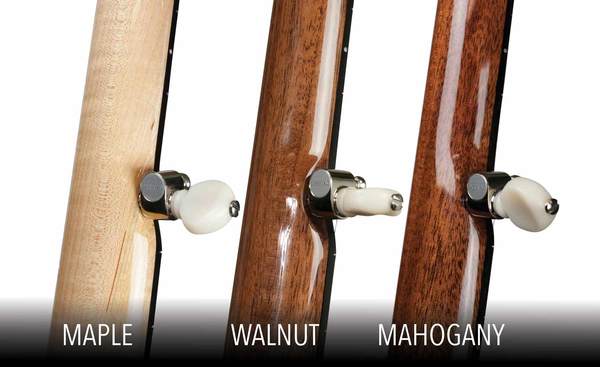 Both maple and mahogany necks have their advantages and disadvantages. Though maple is great in terms of sustain and stability, some players want mahogany since it’s lighter and more responsive. These are two great guitar neck materials, and it’s safe to choose either.