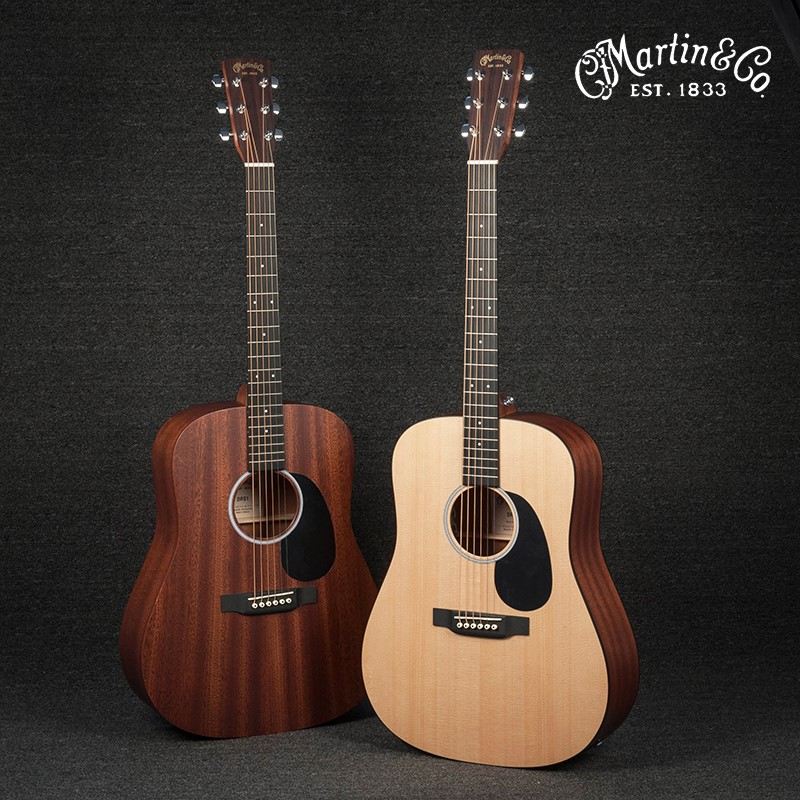 It’s really good to have versatility when playing guitar — you’ll get enough volume when played unplugged and get acoustic tones when connected to an amp. This is the reason why many musicians are now looking for acoustic-electrics, rather than fully acoustic or fully electric (except for loyalists and hardcore guitarists). So, this article will clear up the long-running debate on the Martin DRS1 vs DRS2.

Martin, as one of the oldest guitar manufacturers, is a trusted brand when it comes to acoustic-electric guitars. In fact, many buyers are still stuck on the Martin DRS2 vs DRS2 problem. These two are among the best acoustic-electric guitars on the market. And, while it’s okay to pick either because it’s a Martin, they differ on a few things. So, to help you with your needs, this article will detail every important aspect of these two.

Both DRS1 and DRS2 belong to the Martin Road Series but are now listed under discontinued guitars on the Martin website. (These two models are rolled into a single updated version, the D-10E.) They have the traditional Martin styling, design and tone, as well. Made of affordable materials, these guitars have Sapele top, back and sides.

What makes these two the same and what makes them different? That’ll be discussed thoroughly in the succeeding sections. The comparison will be made in terms of specifications, design, playability, sound, and price.

Aside from your budget, another deciding factor when buying guitars is the specs. No matter how attractive that guitar is, it’s still wiser to check the papers and its specifications. So, for the DRS1 and DRS2, below is a tabulated comparison for you to easily spot the differences.

From the table, the differences between these two are the topwood, top color, and binding. No wonder, these models are currently released in a single version only with Sitka Spruce top.

Crafted with solid Sapele top, back and sides, the DRS1 offers great resonance and projection. It’s compact and well-built, perfectly designed as a travel buddy or a rugged companion to teens. It has an understated appearance with multi-stripe rosette and white plastic dot fretboard inlays. The bold grain pattern of the Sapele cherry-colored top makes it look gorgeous, which is perfected by the satin finish.

The DRS2 also has its own statement of beauty. Since it’s made of Sitka Spruce top and without added stain, its fine and consistently straight grain is visible. The overall looks of the guitar is further subdued by the richlite fretboard decorated with white plastic dot inlays. Like the DRS1, it also has a multi-stripe rosette.

Both guitars have Performing Artist neck shape with high-performance taper, so you won’t be disappointed with how the neck feels for both. For DRS1, you can feel the contour of the neck, but it’s not overwhelming. The action is quite low, so doing fast play and barre chords up and down the neck is easy.

DRS2 has a slim neck, hence playing between this guitar and any electric guitar needs no adjustment. It has a nice fit to the hand. Since the action is quite manageable, like the DRS1, you can enjoy playing with this guitar even for longer periods as they stay well-tuned.

Out of the box, both DRS1 and DRS2 exude Martin’s beauty and promise Martin’s tone. These two both have the Fishman Sonitone electronics, so no questions about the plugged-in sound, as they are completely ready to be connected to any amp. Check out how the DRS1 sounds from this YouTube video:

DRS1 offers amazing sounds with a crisp, deep and warm character. The sound from DRS1 is nicely balanced and fantastic to play every day. DRS2 offers a full-bodied sound with more emphasis on the low-end, crisp mids and highs. This guitar is particularly impressive when it’s plugged in. Listen to this YouTube video to know how the DRS2 sounds:

The concept of affordable guitars differs from person to person. Some people may find Martin DRS1, which is under $1000, to be affordable, while others feel it’s very expensive. But, comparing these two, the DRS2 is pricier by $100.

Your choice between DRS1 and DRS2 will still depend on you, your playing style and the kind of music you want to play. From the comparison, it seems that DRS1 and DRS2 are equally great in all aspects, though DRS2 is even better when plugged in. So, if you think the $100 difference is kind of big, you can choose to have the DRS1.

It’s a wrap and the Martin DRS1 vs DRS2 comparison shows us that these two acoustic-electric guitars are practically made equal. Except for the topwood material, the price and a little aesthetics, both guitars are playable and have a great sound output.

Whether you choose the DRS1 or the DRS2, you can’t go wrong with these two. Whether you keep the $100 and buy a DRS1 or spend it to buy the DRS2, it’s your call. After all, you will be the one to use it and you should buy the one that fits your preferences and your style.

Remember, Martins aren’t cheap, they have standards that make them one of the best. In general, a Martin quality guitar around $1000 is hard to beat. Since these are acoustic-electrics, you’ll get extra versatility, too, don’t you think?