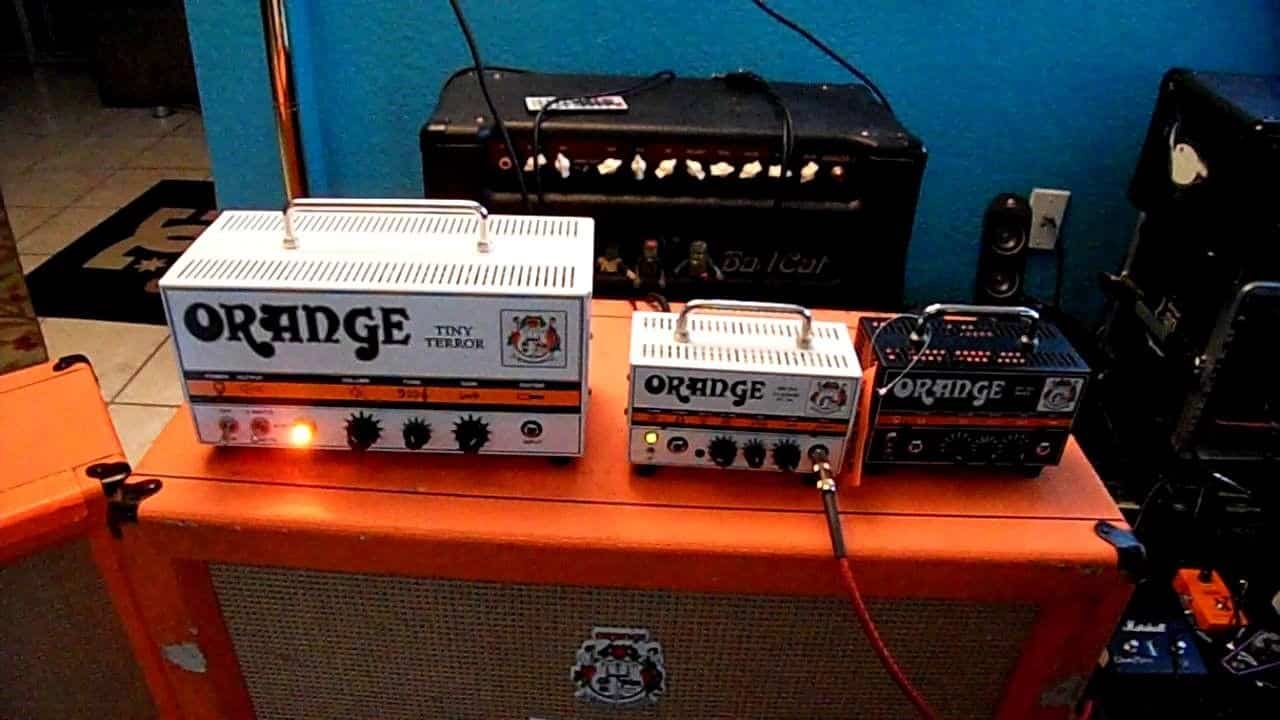 As mini amps get more and more popular, it’s not uncommon to see people talking about Orange Micro Dark vs Micro Terror. You like both amps and have a hard time making up your mind? Then this article could help you out.

This amp head series is one of the most successful and popular amps from Orange. These may not be the best in the market, but they are portable, robust, and versatile, making it a good choice for musicians who are always on-the-move.

Though they are tiny (but not very tiny) they have more powerful distortion, which makes them a good companion for those who travel light and those who are space-conscious musicians. Among the extra-compact models are the Micro Dark and Micro Terror.

The Micro Dark is based on the acclaimed Dark Terror amp. It has a new 12AX7-driven high gain preamp section that’s capable of the dirty screams out from its miniature shape. It has a black chassis that offers classy and confident tones. Micro Dark has a fully buffered effects loop and a headphone output, just enough to keep this amp as a good practice companion.

On the other hand, the Micro Terror is a scaled-down incarnation of the discontinued Tiny Terror. With the valve preamp coupled with a solid-state output section, you’ll get interesting mockery from this small amp head. Since it’s only under 1 kg, it’s very portable and can squeeze in easily in a space-limited studio.

Some people may not believe that a miniature amp like these two could give enough headroom, where you can crack up the volume without suffering any distortion. They both have a sturdy, high tensile steel casing that makes them fit as a go-to amp. Learn more about what they have in the table below.

Micro Dark is a good tone-shaping tool like its bigger counterpart, the Dark Terror. You’ll get a master volume on the left with the preamp gain to the opposite side. One thing that is not found in the Micro Dark that is in the Micro Terror is the AUX In. Instead, it has a buffered effects loop and the ‘Shape’ control to replace the Tone controls of the Mini Terror.

Using single-coils, if you set the volume of the Micro Dark to full, you’ll get pure tones. When you plug this thing you’ll get bigger and more bass thump, your ears can’t believe. The Shape control is responsible for a variety of tones across the midrange frequencies.

Though the Micro Dark can’t produce one tone, at a time, it has varied tonality especially with a little help from the Gain and Shape controls. This is a metal amp, primarily, but if you’ll use the right pedal with a larger speaker, you’ll tame this little fella to scream just any genre.

Since these are small amps, you can see that they have limited controls, but with Micro Terror, you can easily dial everything from clean to saturated tones. The AUX In, which is not found in the Micro Dark, is great to get external audio sources like an iPod or a stereo. Additionally, this feature is pretty handy, especially for late-night practice.

Since both amps are a single-channel only, changing from clean to dirty tones requires more than just a push of a button. You need to master adjusting the controls of the amp on the fly. Thankfully, they are both responsive to the changes in the guitar’s volume knob, so you can just learn to deal with this pain quickly.

Micro Dark works perfectly at home and studio use. Some users say that the sound is a bit duller on the Micro Dark. The Micro Terror is a better amp for rock, hard rock, and metal, but the Dark is a good choice for these genres as well.

Micro Dark is more versatile because of the effects loop added. It’s perfect to get cleaner blues with light distortion to heavy modern tones. With the added features, the Micro Dark is more towards modern high-gain-like while the Micro Terror is more of a vintage-voiced amp. To get more information about the sound comparison of the two, check out this YouTube video:

More features usually mean more price, but for the Orange Micro Dark vs Micro Terror, you’ll only get around $40 difference. The Micro Dark is more expensive than the Micro Terror. But, if you want more versatility on your music production, Micro Dark is better.

Orange Micro Dark seems to be more versatile and powerful than it looks. Although it’s a little pricier than the Micro Terror, it’s worthy of the money you’ll invest in it. And, if you dig deeper, they are two budget-friendly, portable and versatile.

Picking one over the other primarily depends on the preference of the user. The Micro Terror has more distortion effect, while the Micro Dark has looper effects in addition to the distortion. No wonder it has a higher price compared to the Micro Terror. Whichever of the two you’ll choose, Orange makes great amps.