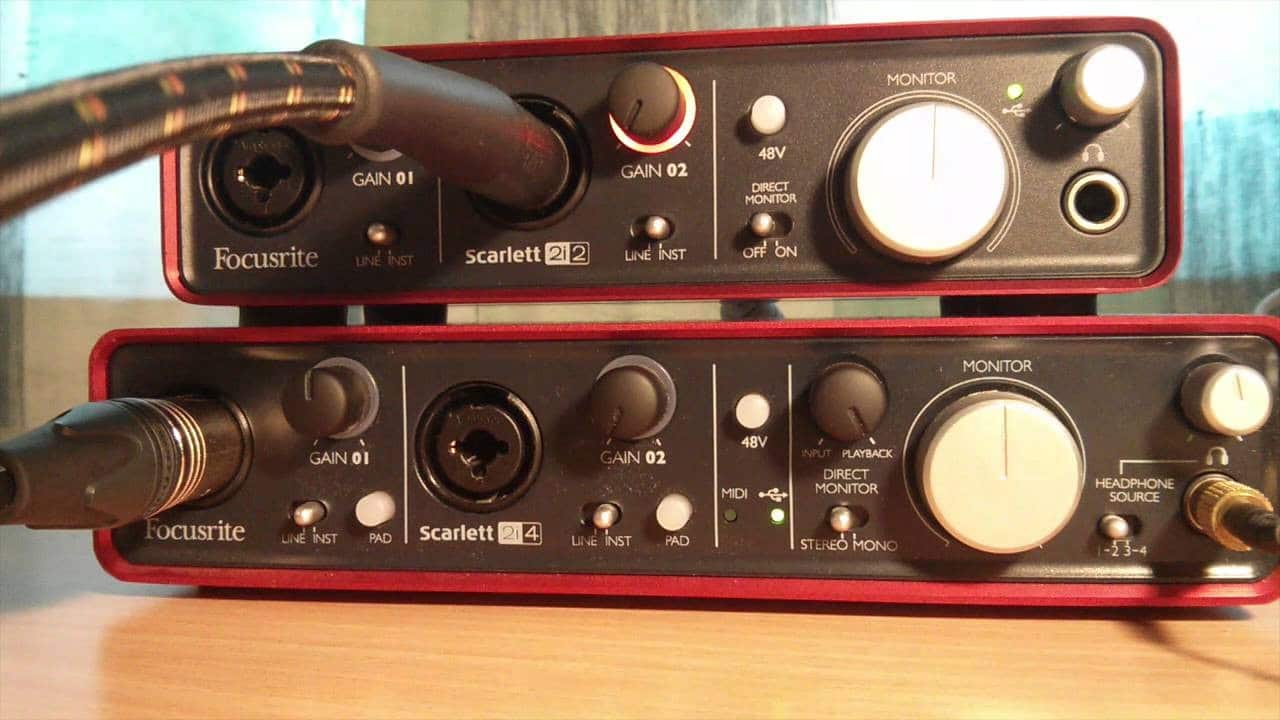 Getting the best sound quality for recording or podcast is very important, especially in this day and age. There’s one tool that can help you achieve your greatest potential as a musician or recording artist — through an audio interface. In line with this topic, this article will particularly discuss the popular Focusrite audio interfaces — Scarlett 2i2 vs 2i4.

But, what are audio interfaces, you may ask? For those who are not familiar with audio recordings, an interface is a piece of hardware that expands the sonic capacity of your computer. It offers more input and output, so you can use microphones, headphones and other musical instruments. In addition, it’ll also enhance the sound quality of your recordings. Hence, a good audio interface really makes a big difference in your production. How much more if you’re using the best?

The Focusrite Scarlett 2i2 and 2i4 Overview

Scarlett 2i2 (2nd generation) and its bigger brother 2i4 (2nd generation) are just two of Focusrite’s quality audio interfaces at affordable prices. They are portable, yet versatile, allowing you to take your performance to the next level.

Their power comes from the USB cable, so you can bring it anywhere and record without a problem through your laptop. These models come with microphone preamps, +48V switch that powers condenser mics and a direct monitor. Either of the two will give you great sound through the preamp while you record.

In terms of construction, these two are also the same, offering you a very smart anodized aluminum casing — lightweight, yet sturdy. Both audio interfaces have inputs located around the Gain controls which makes them compact. They have a lot of shared features, so check out the table in the next section to see what makes them unique from the other.

For some reason, the 2i4 has been the ‘Best Pick’ for some producers and artists, yet, it doesn’t mean the 2i2 doesn’t have any room anymore. The comparison below will help you understand why is one more favored and the other seems to be a backup.

Scarlett 2i2 vs 2i4: Performance

It’s already mentioned that it’s powered through the USB cable, which makes them both a handy choice of the audio interface. However, if you don’t want to lose the power mid, you should plug the laptop into the mains.

Since it has phantom power, it can power condenser mics on the go. Additionally, you can also monitor your music production by connecting headphones to avoid latency that is inevitable when recording using a computer.

The compact design offers a comprehensive control panel. The knobs and controls are of high quality making your settings more reliable. If you can see the price, you’ll be surprised how Focusrite pulls it through. Recording on both audio interfaces is superb with 24 bit converters. You can get crystal clear output with minimal noise or coloration of the signals.

Scarlett 2i2 vs 2i4: Differences

As per the tabulated comparison of the features, you can see that they differ in two things — the dimension and the simultaneous input and output capacity. So, how do they affect the performance of these audio interfaces?

For the 2i4, you can set the headphone output to be used independently of the main output. This means that you can monitor different sounds through the headphone output without feeding it into the speakers. Additionally, the 2i4 has MIDI I/O, although not much of game-changer because most interfaces now support USB, but it’s more versatile than 2i2.

The 2i2 has a direct monitor if you want to hear the input directly without latency, while the 2i4 has a dial that allows you to listen to the blend of the direct monitor with playback. Lastly, the following YouTube video will help you get more idea about the differences between the two Focusrite audio interfaces:

Maybe the extra output entails a few more dollars? Perhaps, given all the similarities and only a few differences, the Scarlett 2i4 is $30 more expensive than the 2i2. However, if you’ll get the advantage of the two more outputs, why not?

Both Scarlett audio interfaces are unexpectedly cheaper with their great performance and reliability. Their construction too seems to be a high-end craft. So, whether you pick the cheaper 2i2 or the expensive 2i4, it’s one of the few purchases you have that you won’t regret.

To keep up in this demanding world, it’s very important to have the right tools when doing music or audio productions. Thankfully, Focusrite offers two affordable, yet reliable audio interfaces that anyone can use. This article has thoroughly discussed the Scarlett 2i2 vs 2i4 and detailed their similarities and differences.

For those who’ll do recording, spending an extra $30 for the 2i4 is more than worth it. You can take advantage of those two more outputs, which allow you to level up your mixes and performance. Similarly, the 2i2 is also a great choice, especially that it’s handy and compact.