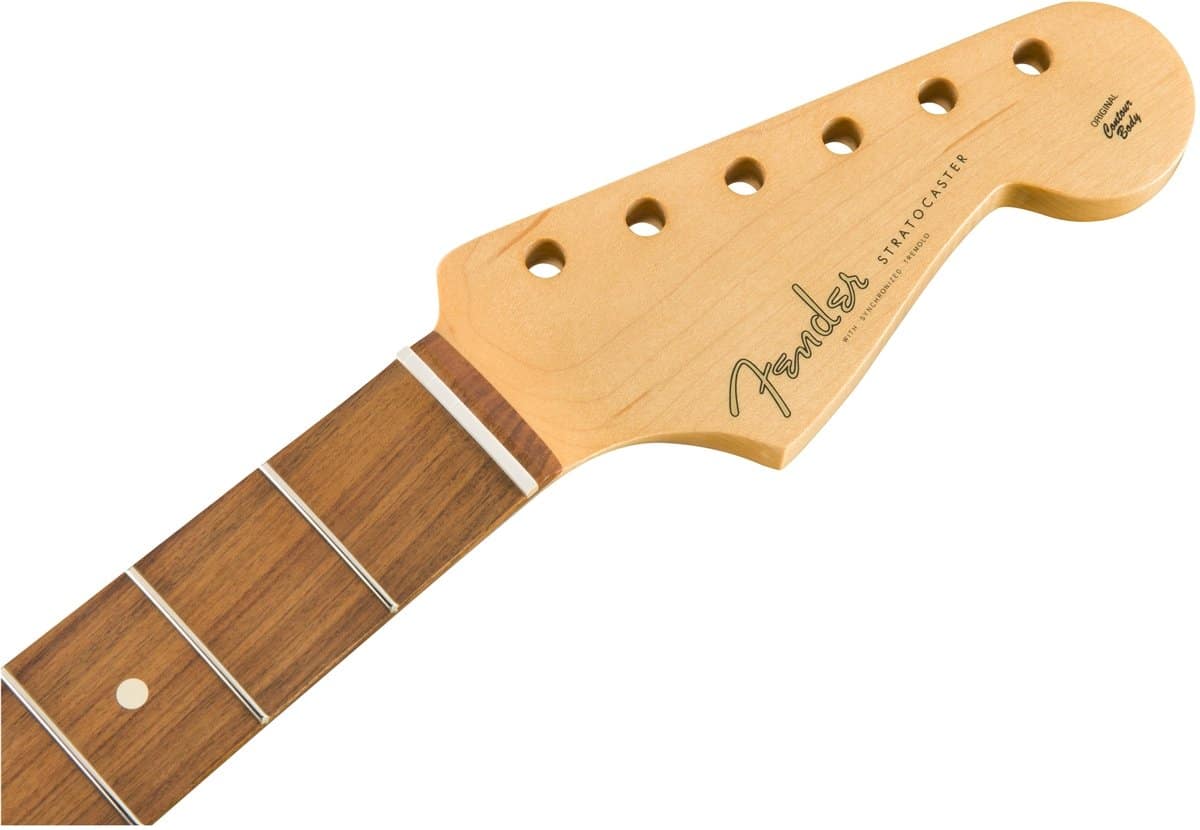 Once it comes to customizing guitars, Strat neck on Tele is a topic that catches the interest of many guitarists around the globe. Since it’s not uncommon for parts of guitars to be interchangeable, a couple of people assume that the neck of a Stratocaster could work on a Telecaster. You like to give your Telecaster a Stratocaster neck but don’t know whether that it’s possible? Then this article is going to be of use to you.

An Overview Of The Situation

Overall, the Strat and Tele necks share a lot of similarities such as the scale length, pocket depth, neck pocket width, number of frets, …. That being said, there is a key difference that sets the necks apart: shape. For your information, the Strat neck is rounded while that of the Tele is squared, not to mention that Stratocaster’s headstock is also larger. Hence, if you match the neck of a Stratocaster to a Telecaster, small gaps may appear in the pocket’s corners which results in the wrong intonation.

All things considered, while it is not advisable to do so, you could put a Strat neck on Tele. You must make a few modifications before installing the Strat neck on Tele. Also, it’s essential to give the design some thought: the Strat necks either have a 4-bolt joint or a 3-bolt joint while the Tele necks only use a 4-bolt joint. Last but not least, products from different manufacturers might have slight differences in terms of neck size and neck pocket so you should use a standard Fender guitar.

A Guide For Novices

Which Strats Have 3-Bolt Joints?

If you consider setting up a Strat neck on Tele, it is a good idea to stay away from guitars produced between 1971 and 1977 as they only have 3-bolt joints on the neck.

Can Tele Necks Fit Into Starts?

Even though Strat necks are applicable on Tele bodies, it does not work the opposite way. You cannot install a Tele neck in a Strat due to the shape: the neck pocket of the Strats is curved while the Tele necks are squared.

They are not universal, unfortunately. Even when being set in the Fender family, it is still not as popular as other necks. Because of that, you must pay attention to the measurement so you don’t use incompatible parts.

Is It Possible To Put A 22-Fret Neck On A 21-Fret Telecaster?

Yes, but it must overhang to maintain the 25.5-inch scale length. Otherwise, the intonation is going to take a serious hit.

Are There Any Famous People Putting Strat Neck On Tele?

Yes, and that is Eric Clapton, one of the most famous guitarists. He was seen to use a Telecaster with a Strat neck while playing in Blind Faith. Additionally, Steve Morse also has a Telecaster like that.

What Radius Should My Tele Neck Be?

The common radius of the fretboard for electric guitars is 9.5 inches which is considered the perfect mid-size that suits lots of players. Actually, 9.5 inches is the standard for current Stratocasters and Telecasters.

What Makes The Start Sound Good?

The distinctive voice of the Stratocaster is produced thanks to the three pickups and the wire-coiled magnets. They do a good job of transmitting the string vibrations to the amplifier. At the time when the Strat was released, electric guitars only had one or two pickups.

Is Strat Easier To Play Than Les Paul?

The answer is no. The playability relies heavily upon the tension of the strings and you need more force to make the strings work if they are tenser. The Les Paul’s string tension is lower than that of Strat, thus making it easier to play with for most of the time.

What Kind Of Neck Is The Easier To Play?

There is no definitive answer to that question since it depends on players’ preferences. There are people who prefer a thicker and rounder guitar neck while others like a flatter or thinner neck. However, the most commonly used type of neck is the C-shape one.

Which Is The Best Guitar Neck For People With Small Hands?

If your hands are small and facing difficulties while spanning frets, it is suggested that you try the C or flat C-shaped necks. They are usually shallower and it makes a great combination with thin fretboard, hence appealing to those with small hands. In the case that you also want to know about the radius of the fretboard, 12“ or above should be great.