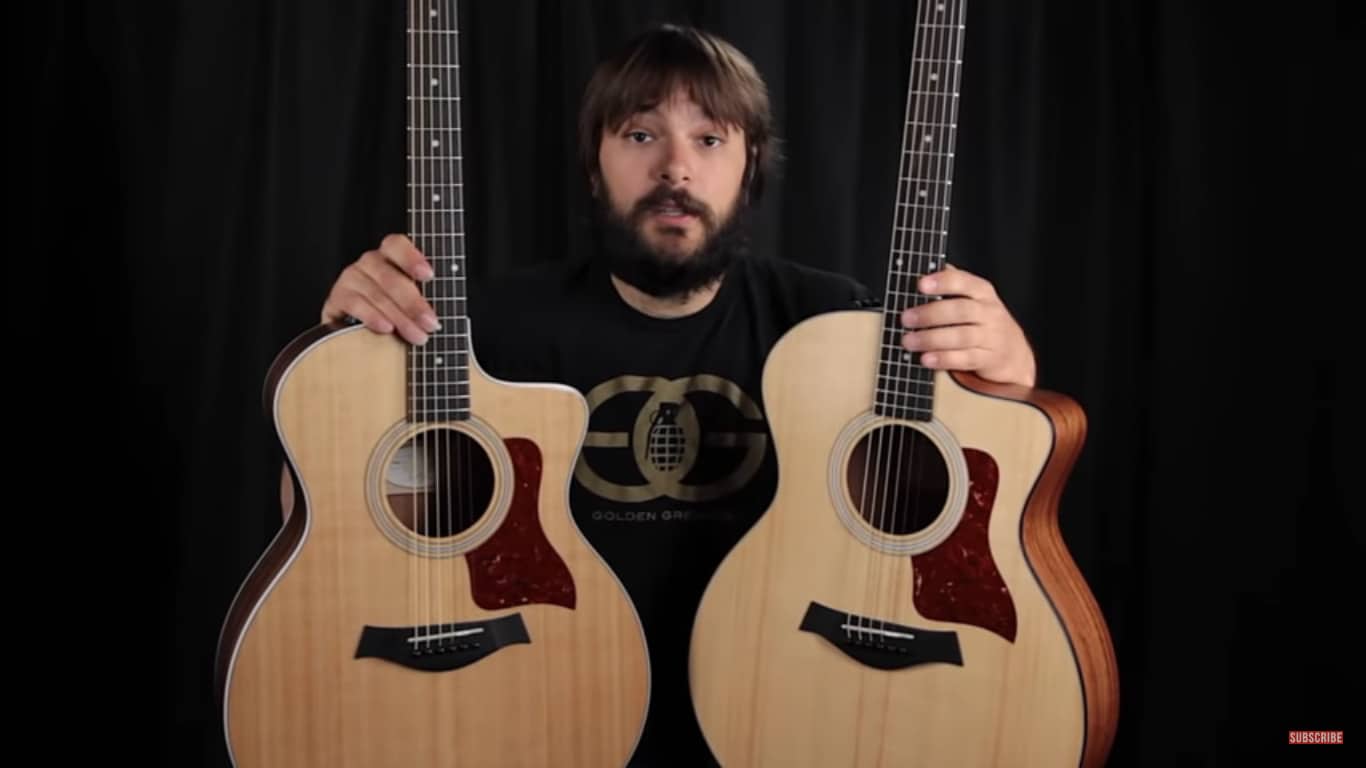 Are you looking for a cutaway grand auditorium that fits your budget and style? Well, if you are, the debate between Taylor 114ce vs 214ce is on. Actually, they share a lot of common features and specifications, but (for some) one is better than the other. And, which one is better depends primarily on the player.

Yet, aside from the player’s preferences, both Taylor 114ce and 214ce became more popular for some reason. Of course, the first reason would be, it’s a Taylor and it has a top-notched construction quality. Other than that, the playability, the sound, and the price of the two will be contrasted. And, which is the best? Well, you’ll find out right at the end of the article.

Taylor 114ce and 214ce both have Venetian cutaway to easily access the upper frets. They also have the dynamic Expression System 2 pickups that deliver the natural acoustic tone of these guitars even when plugged. They share a lot of things, so how is the Taylor 114ce differ from the 214ce?

Having to choose between two of Taylor’s acoustic-electric guitars is intimidating. Which is why it’s very important to compare their specifications first. Below is a comprehensive table that details some critical specifications of the Taylor 114ce and the 214ce.

Looking closely, Taylor 114ce and 214ce only differ in three things: binding, pickguard, and the hue of the tonewoods. The 214ce appears to be a little brighter than the Taylor 114ce. If you can’t decide which among the two by just merely looking at the specifications, maybe their playability and sound comparison could help.

Of course, both guitars have Taylor quality and they are both great and reliable. Taylor 114ce has double varnish giving it additional protection and great feel to the touch. The ebony fretboard and the bolt-on neck is very stable, making it very comfortable to play.

Additionally, the forward-shifted bracing pattern makes the guitar sturdy and more intact. The neck is smooth with relatively low friction, so it’s perfect for strumming, flatpicking, fingerpicking, and other playing styles.

The Taylor 214ce is a powerhouse. It’s designed to be played for longer hours and will stay in tune even when used daily. It has an adjustable truss rod that helps you lower the action to make it closer to an electric guitar. The neck is glossed, so you can play fast without any sticking of the hands.

While they seem break even in terms of design and playability, what about the sound? Though they have the same Sitka Spruce top, they have different layered back and sides. So, there’ll be a slight difference between these two.

Taylor 114ce, with the walnut back and sides, has a warmer tone with more emphasis on the mid-range. It’s a compact sound that will reveal the natural amplified sound, thanks to the Expression System 2 onboard.

The Taylor 214ce with the layered Koa back and sides offers more clarity, with punchy lows, and crisp and clear highs. When played unplugged, it’s cheerful and beautiful. Yet, because of its electronics, 214ce is an all-around powerful when connected to an amp. Whether playing for a small crowd or to an auditorium, the Taylor 214ce is always up for the challenge.

It’s worth noting, however, that through time, both the walnut and koa will tend to become warmer and softer. Watch this YouTube video so you’ll know how they sound before buying one of them:

Now, it’s inevitable that there’s also a price comparison. And, while they are both playable with great sound quality, Taylor 214ce is more expensive than the 114ce. Koa isn’t a cheap tonewood, which can be found in some limited-edition guitars. On the flip side, the walnut is a common alternative to koa and is mostly found in more affordable guitars. So, there you have it, the reason why the 214ce is more expensive than the 114ce.

Honestly, the Taylor 114ce vs 214ce is a tie. There’s no significant difference between the two, except, of course, the pickguard, the back and side materials, and the price. They are both playable and they sound great. Although they may have different tonal characteristics at first, through time, both koa and walnut will produce warm and softer tones.

In general, it’s safe to pick either of the two. But, it’s always wise to try them before buying. Try as many guitars before buying, even if they are not Taylor. If you don’t know how to play yet, ask someone to play for you and you will listen. The more you’ll play and listen to the guitar sound, the more concrete your decision is whether to choose Taylor 114ce or the 214ce.

However, if you’re short on budget, just go for the Taylor 114ce. Why will you spend more when you can get the Taylor sound and playability from the cheaper one? In the end, it’s always your choice. Whether you choose one over the other, you know they are both good acoustic-electric guitars.