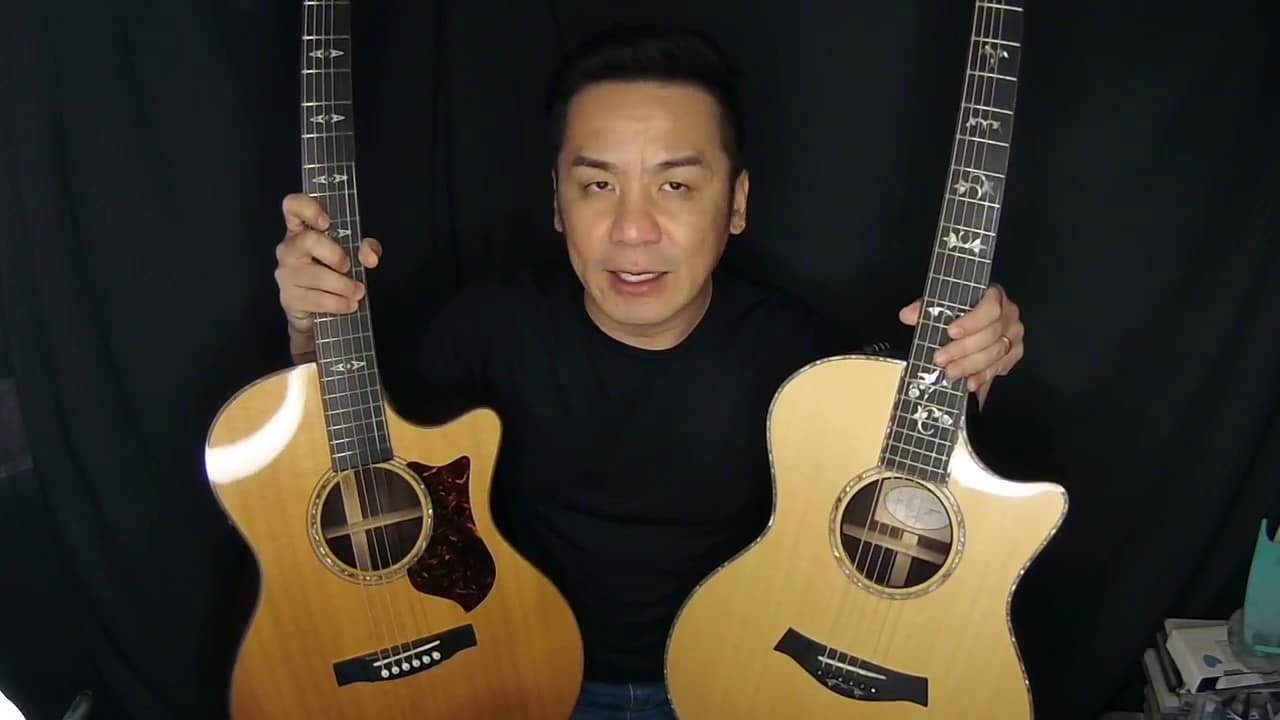 In discussions about guitars, Taylor vs Martin guitars stands out from others comparisons since both brands have a reputation for releasing quality products. Guitars from each of the brands offer distinctive features so choosing between them is no cakewalk. Both brands show up in your shortlist and you cannot pick one over the other? Then this article is exactly what you need,

Established in 1974 by Robert Taylor, the Taylor Guitars is one of the fastest-growing guitar manufacturers that easily compete the old Martin Guitars. It’s known for its professional and affordable guitars for professionals and beginners alike.

Taylor offers a more modern collection of guitars, which players like Damon Albarn, John Petrucci, and Taylor Swift are using. It also has a patented body design, the Grand Auditorium. Aside from acoustic guitars, Taylor also has electric guitars with signature ‘Taylor tone’ — bright and rich.

Maybe, there’s no legendary musician who hasn’t played a Martin guitar. Founded in 1833 by the German immigrant C.F. Martin Sr., he first made guitars under his name. And, today, Martin Guitars still run and owned by the C.F. Martin family.

Martin is prominent for inventing the most popular acoustic guitar design, the dreadnought guitar. Based in Nazareth, Pennsylvania, Martin Guitars continues to produce excellent guitars. No wonder, legends like Johnny Cash, Elvis and Paul McCartney played a Martin during their times.

In terms of construction and design, Taylor and Martin are two different kinds. Taylor is geared towards forward-thinking using modern techniques available. Martin, on the other hand, retains the traditional style, which, of course, is working well for almost two centuries. Taylor Guitars are done on a big scale, while most Martin Guitars are handcrafted.

Another big difference between their designs is the neck angle. Taylor guitars have neck angles that can be easily adjusted to accommodate natural changes. Although the reset needs refinishing and additional cost, it’s not like you’ll change it every day. It’s just only for a couple of decades. While for Martin Guitars, they have the standard, non-adjustable neck that still has a resonant depth tone than Taylor’s.

Most guitars are made using the X-bracing, but it has some limitations. With this type of bracing, you’ll only get either better sustain or more volume, you can’t have both. However, this is what Martin usually has in their guitars. It offers a more traditional acoustic guitar sound.

For Taylor, their Master Builder Andy Powers created a more versatile kind of bracing, which offers great volume and better sustain, the V-Class bracing. Surprisingly, aside from enhanced volume and sustain, it offers better intonation, too. Guitars with the V-class bracing has a more focused and studio-like sound quality.

Both manufacturers are making great instruments. When these two are properly setup, their playability is superb. Taylor has an adjustable neck angle to easily adjust the action, whenever you need. On the flip side, Martin offers a set-neck, which is non-adjustable, yet it provides better energy transfer between the body and neck.

Another factor when considering playability is the fretboard radius. Most Martin guitars have 16-inch radius, while Taylor is slightly smaller at 15-inch. The smaller radius of Taylor makes it easier to fret the barre chords, while the flatter radius of Martins is perfect for melody and lead guitarists.

Not all guitars are made great for all playing styles. One guitar may be best for fingerstyle while the other is better when strumming. With fingerstyle, it’s better to grab a smaller guitar like Taylor’s Grand Symphony and Grand Concert. Likewise, Martin’s smaller models are also better for fingerpicking that the dreadnoughts. Taylor guitars are more preferred by players who do fingerstyle often.

On the flip side, when strumming and flatpicking, there is a need for bigger and louder sound projection. Hence, Martin dreadnoughts do that better. But, Taylor guitars are also preferred by those who sing while strumming because of its less overpowering sound. So, for strummers and flatpickers, a Martin guitar may be preferred.

Both makers have great pickups. Taylor has its very own Expression System that is designed to capture sound beyond the saddle rather than underneath it. It has a reputation to recreate a natural acoustic tone.

Sound varies depending on the size, the shape and the material used. So, for both Martin and Taylor, each guitar has its very own unique tonal characteristics. However, as you know Martin has been there for almost two centuries, so most people may think that Martin’s sound is the “classic acoustic guitar tone.”

Since Taylor is just there in less than a century, you can feel a more modern touch of their sound – crisp, well-balanced and articulate. Taylor is more focused on the upper mids, while Martin is in the lower mids. Indeed, the Martin tone and the Taylor tone are completely different. In this YouTube video, you’ll clearly see their unique sound characteristics:

Taylor vs Martin guitars debate is not actually a comparison between the best, but between the classic and modern approach to music. As you can see, Martin preserves tradition, while Taylor embraces the new and the modern. So, from this article, you should realize that you don’t need to choose either of them. You can have both a Martin and Taylor. Play the former when you missed the old times and play the latter when you need a futuristic guitar piece.