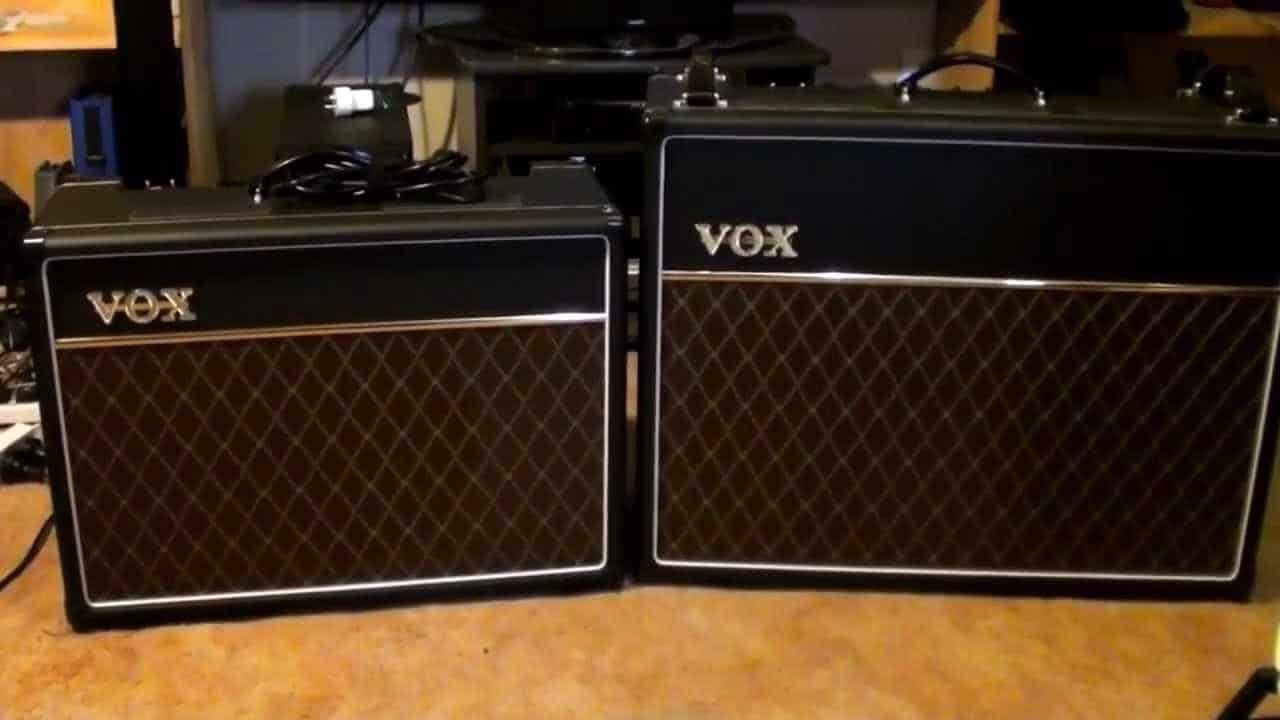 If you are on the look for tube amps, you’ll surely come across Vox. The Beatles, Queen, and the Rolling Stones are among the famous musicians who used Vox AC30 guitar amplifier. So, no wonder, it’s among the popular choices of many, particularly the Vox AC15 vs AC30. This article will discuss these amplifiers, as well as give more information on why they are the choice for these legends.

Founded in 1957, Vox is a musical equipment company based in England. Aside from its famous amplifiers, Vox also makes wah-wah pedals and some electric and bass guitars. A year after its foundation, the 15-Watt Vox AC15 was launched. This smaller amp was being popularized by the English instrumental rock band The Shadows and other rock ‘n’ roll musicians.

In 1959, the bigger (younger) and more powerful brother Vox AC30 came with the request of The Shadows. Basically, the Vox AC30 is just a double-powered AC15 that has 12-inch Celestion Greenback or Alnico Blue speakers.

It’s clear that they differ in power — the AC15 is not as powerful and loud as the AC30. Yet, the table below will show you some hidden treasures of these tube amps. Vox equipped these two with features you can’t say “no” to.

The AC30 has more inputs and outputs, including the FX Return and Send. Additionally, you might want to check the AC30 with added features like the Reverb. Check out their performance and sound to see whether you’ll get the bigger AC30 or the smaller AC15.

From the dimensions and weight specified in the table above, it’s no question that the AC30 is not only bigger in terms of the power output, but also on its size and weight. It’s heavier than the AC15, which is a consideration if you want tube amp you can carry around. Though it’s not that big, its size is noticeably taller than the AC15.

Of course, the AC30 is certainly louder with the Greenback speakers compared to the AC15. Though the AC15 doesn’t have the silicon rectifier, so you won’t get that “sag” feel when you crank it up. Some players may like that because it creates a certain amount of compression, but it also has a drawback like the “ghost” notes.

Both Vox amps are gigable, but you might need to use a microphone for the AC15 to produce clean tones, which you can easily get from the AC30 because of the added headroom. Performance-wise, they are at par, especially that they have almost the same features, except that the AC30 has additional controls and I/Os.

These two have slightly different voicing. If you want to have clean sounds even at louder volumes, you might need the AC30. For a crowd of around 300+ people without an in-house PA system, the bigger and louder one will surely suffice. The two speakers and four tubes give richer and more complex sound output.

On the other hand, if you’re not concerned with the loud and clean tones, but instead a more focused and tamed response, the AC15 is perfect for you. This YouTube video will help you distinguish the difference between these two amps in terms of tonality:

Given that the AC30 has more power, inputs/outputs, and controls, it’s more expensive than the AC15. Of course, with the more expensive price tag, you’ll get more headroom and enjoy louder volumes perfect for a bigger crowd. You already know the difference between the two in specifications, performance, and sound, so it’s up to you to spend more on an AC30 or just spend around half of the price of an AC15.

Picking between two Vox amps — Vox AC15 vs AC30 — is quite easy because it’s your personal decision. After all, no one knows exactly what’s best for you, except you. This article has already detailed everything — specifications, performance, sound and price. So, it’s up to you to decide.

In summary, AC15 is cheaper, smaller and handier amp that offers a more focused tone. AC30, on the flip side, is your choice if you want louder sound output for large crowd performance. It’s bigger, heavier with more headroom and more control over your music. Additionally, it’s also more expensive compared to its smaller, yet, older brother.

If the purpose of getting a Vox is to get its classic “Vox” tone, you can get it from either of the two. So, it’s your time to shine and choose which Vox is better for you.