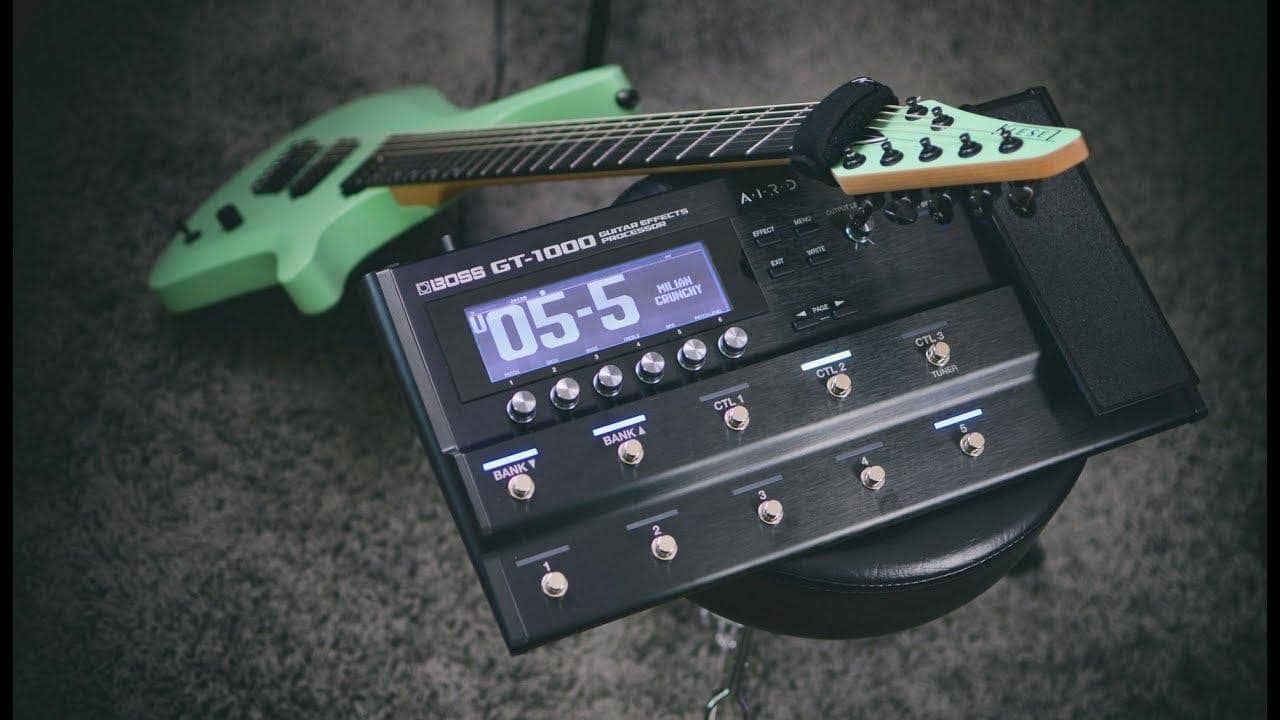 Considering the popularity of Boss GT 1000 and Helix, it’s only natural that comparisons about Boss GT 1000 vs. Helix appear from time to time. Owing to the differences between procesors, they score differently once it comes to effects, tone and response. If you can’t make up your mind o what to get, you have come to the right place. This article will thoroughly compare everything between Boss GT1000 and Helix to figure out which one is superior.

One of the most powerful multi-effects processors and modelers, the Boss GT 1000 seems to be the “boss” over its competitors in the market. You’ll get an unmatched tone because of its groundbreaking AIRD (Augmented Impulse Response Dynamics) technology and a lot of features onboard. You’ll enjoy all the cutting-edge BOSS effects, a few routing options, and real-time control.

Boss, a division of Roland, is a great company selling effects pedals. With over 40 years in the industry, for sure, Boss knows what it’s doing. With the Bluetooth connectivity of this processor, you can adjust the effects, controls, and sounds from your mobile phone, the BOSS Tone Studio app. So, you can enjoy exploring all the possibilities in music production using the GT 1000.

You won’t go wrong with Line 6 Helix as it sets a new standard of guitar processors. This has a straightforward and intuitive interface that even beginners can easily familiarize with. The Helix is flexible, versatile, and has both vintage and modern amp models for all types of players.

As a subsidiary of Yamaha, you know Line 6 isn’t just any other hard working startups out there. With more than two decades in the industry selling effects units, audio interfaces, and guitar wireless systems, the Helix is one of the best products they have. You’ll know it’s right to choose the Helix after you’ve read this review.

Since these two are very popular in the market, it’s hard to just pick one without weighing their specifications. What made them different and what made them unique? Let’s find it out in the table below.

From the table above, it’s very clear that they are feature-packed. The Helix accommodates more inputs, while they have almost the same number of outputs. The GT 1000 has Bluetooth connectivity, which is quite enticing for this day and age. And, lastly, the GT 100 seems more handy and lightweight compared to the Helix. (Specs are taken from Sweatwater.com)

Both guitar processors and modelers are great. As you can see from the specs table above, the comparison is neck-and-neck. The next thing to compare is how user-friendly these tools are.

For the GT 1000, there are 20 AIRD preamps that offer pretty much any type of amp models you can think of. Since it’s thin and slim, it’s handy and space-efficient. The front panel is minimalist with only 10 footswitches, six buttons, six control knobs, a master output knob, and a large monochromatic display. At the rear, you can see the connection jacks — the inputs and outputs — and all the ports you need to integrate with other equipment.

As mentioned, the Helix has a pretty straightforward operation with 12 touch-sensitive footswitches, four effects loops, master controller, large color LCD, and handsfree editing mode. Its design and operation appeals to both old-school and tech-savvy producers out there. With the dual-DSP processing, it offers an entirely different experience to the users.

Boss GT 1000 vs Helix: Performance and In Action

The GT 1000 has more responsive, complex and nuanced sounds with a lot of new tones onboard. The Helix offers a dynamic feel and provides great tones and control to the user, especially the software editing mode.

In general, the GT 1000 gives more emphasis on tonality and sound output, while the Helix is more on giving the users ease of operation. Here’s a YouTube video that compares these two modelers using the same guitar. This will help you observe the difference between the two in terms of tonality.

Helix is undeniably more expensive than the Boss GT 1000. However, both processors are great to buy. Depending on your needs and the way you’ll use, their effects processor, one is better than the other. However, if you’re on a budget, the Boss GT 1000 should be a great choice for you.

For you to be able to achieve the best audio production, you need to have a Boss GT 1000 vs Helix. These two are great and unique in their ways.

Now, if you want to achieve the best tone output, you might want to get the GT 1000, but if you want to have simple equipment, go for the Helix, although, it’ll cost you more. However, in the end, it’s still your decision that should prevail.