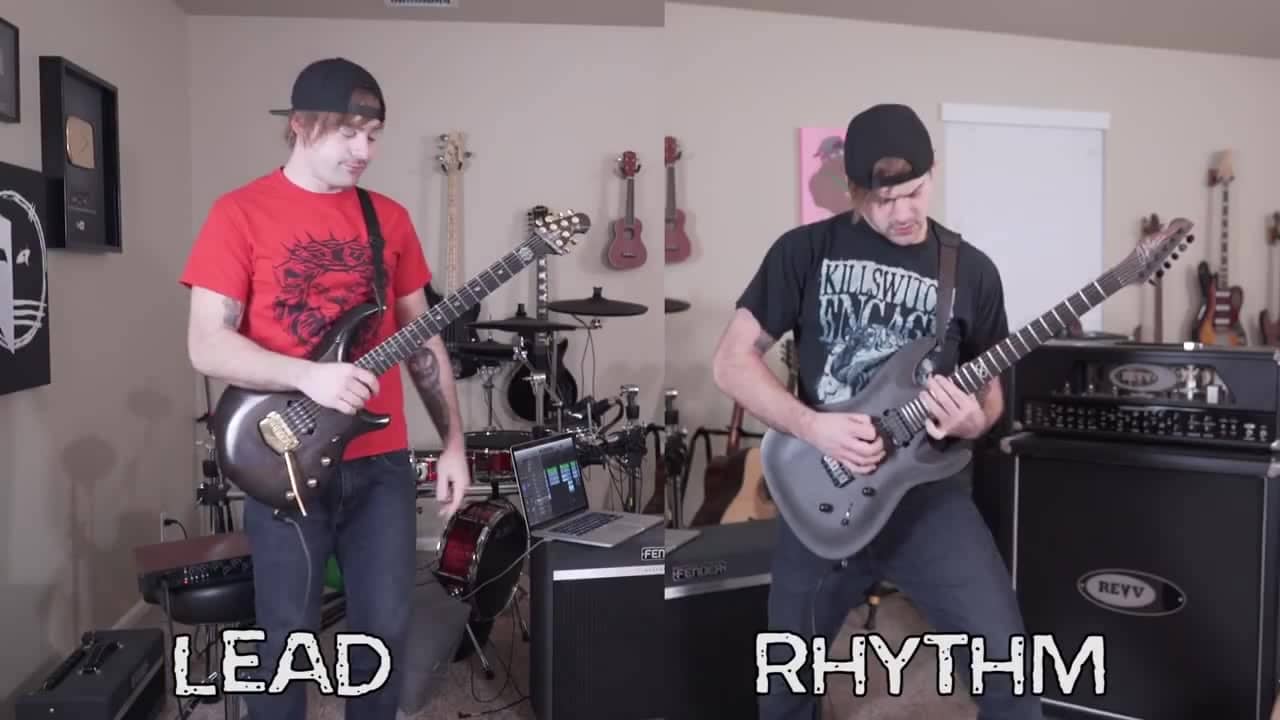 You often hear the terms lead and rhythm guitar when you’re dealing with music bands. Usually, somebody has to play the lead and the rhythm guitar. But, do you know if there are differences when you compare lead vs rhythm guitar?

This article will give you background about these two and answers a few questions that are currently lurking in your head. Do lead and rhythm guitars refer to different kinds of guitar or the role for guitar players? If they refer to a role in a band, can you use the same guitar for these roles? Can you learn both? Which is easier and which should you learn first?

The list of questions goes on and on, so it’s time to really get to the bottom of this. But first, it’s important to have a quick peek at the components of a music band.

What’s in a Music Band?

A band (could be a rock or pop band) is a music ensemble that basically consists of four players. For rock and pop bands, you’ll see two guitarists (one plays the lead role and the other on the rhythm), bassist, and a drummer. The Beatles and Metallica are examples of music bands with four players. 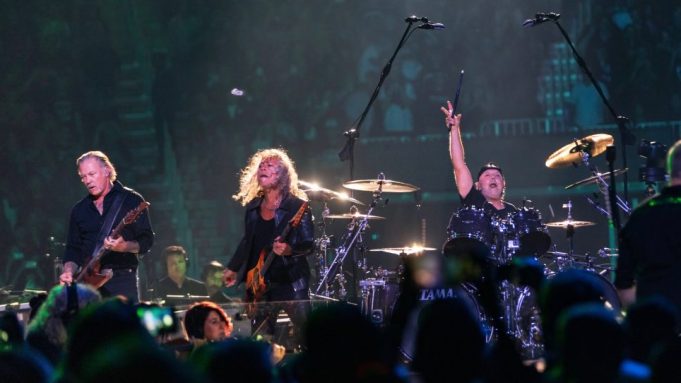 Zeppelin and Queen, on the other hand, are bands with a vocalist who doesn’t play any instrument. Hence, instrumentally, they are called trio with one player each for bass guitar, electric guitar, and drums. Some music bands that you can see today even have a keyboardist onboard.

So, based on the composition of a music band, it’s clear that lead vs rhythm guitar refers to the player’s role, rather than the kind of guitar. One question down. Let’s get into the roles of a lead guitar and a rhythm guitar.

What is Rhythm Guitar?

It’s easier to explain these two by starting with rhythm first. As mentioned, rhythm is a role of a musician in a band. To understand the role of rhythms, you need to understand the rhythm section of the band. This section consists of the drums/percussion, bass, and rhythm guitar. 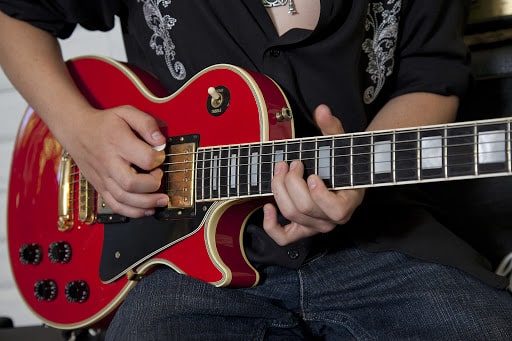 This section creates the underlying beat and chord progression of the music. The drums will start and create the beat. It will then be followed by the bassist, who will support the drums and reinforce the chord progression.

What is Lead Guitar? 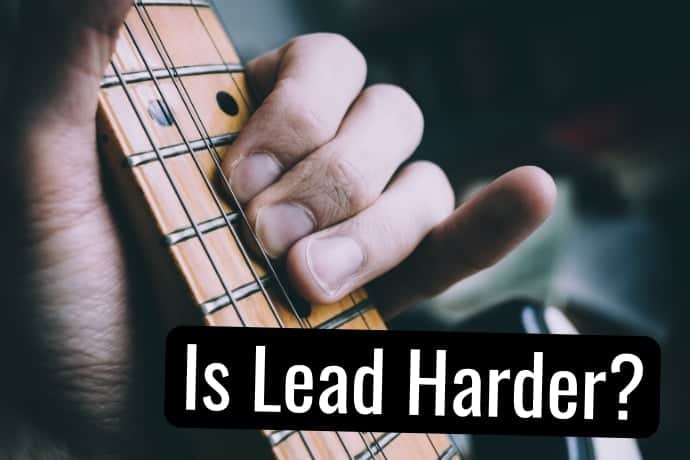 The trickier part of being a lead player is to do rhythm, as well. When it’s time for other instruments to play solos or if the vocalist needs to sing the words to the song, leads won’t just stand there still. Especially in a rock music band, the lead guitarist must be versatile to know when to play amazing solos and when to join the rhythm.

Can You Use One Guitar for Lead and Rhythm?

You know the answer. It’s a big YES. Check out Stevie Ray Vaughan, who was an American musician and singer, best known as a guitarist of the blues-rock band Double Trouble. He was a great lead player, but was also amazing when he would assume the rhythm role.

In his song Pride and Joy, you’ll notice how he managed to play both roles wonderfully. At the beginning of the song, he played a combination of single notes together with the bass and the drums. Between vocal phrases, notice how great he was at his solos – this is now the role of the lead guitarist. As much as he’s a great lead player, he’s also excellent rhythmically.

Which is Harder? Which is Easier?

These are difficult questions to answer because it depends on your eagerness to learn. From the definition and explanations above, you might think that lead guitar is harder because it may also assume the role of rhythm.

However, you must know that there are chord progressions that are very difficult even for advanced players. On the flip side, there are also guitar solos of lead players that can easily be learned by beginners. But, speaking about beginners, the best way to start is rhythm. Even if your goal is to be a lead player, when you play rhythm you’ll learn the fundamentals you can use for any playing styles. 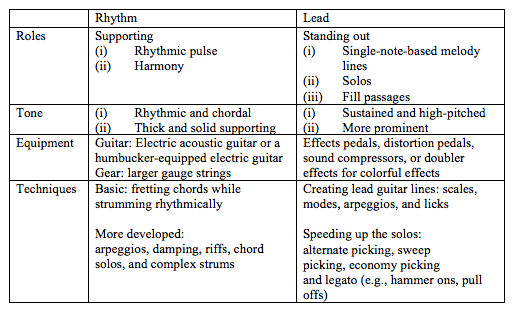 In general, when you play rhythm, you are more focused on strumming power chords, riffs, strumming and fingerpicking chord progressions, to name a few. You might also need to learn basic music theory, a sense of timing, and a very strong fretting hand.

For the lead player, on the other hand, you must be creative especially when you need to add licks and solos in a song. You must have strong knowledge about scales, and you must have good fretting and picking-hand dexterity. On top of that, you must also have the skills of a rhythm player.

Think of a song from your favorite music band and think about the components – drums, bass, and guitars. As you learned the basics of lead vs rhythm guitar from this article, you’ll realize that indeed, song (and music, in general) is complex.

Rhythm and lead are roles of players in a music band. Rhythm player is responsible for creating the beat, while the lead provides the melody and creative solos of the song. Aside from their main differences, you have also learned the skills these roles need and whether it’s easy to learn one over the other. 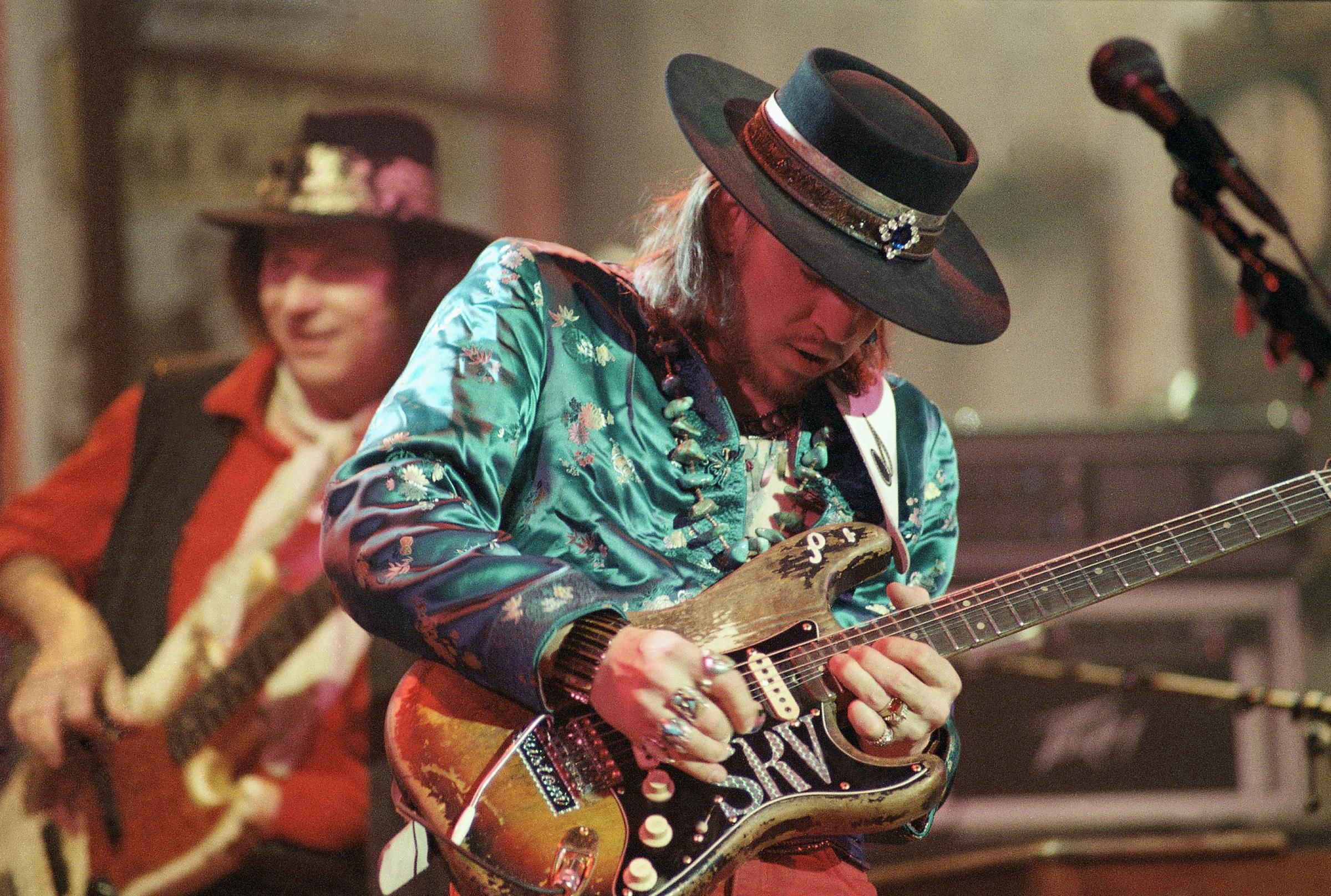 Both lead and rhythm musicians are unique and can help produce wonderful music. If you’re a beginner start with rhythm to learn the fundamentals. Then, master your craft by doing improvisation and solos when you assume the lead role.